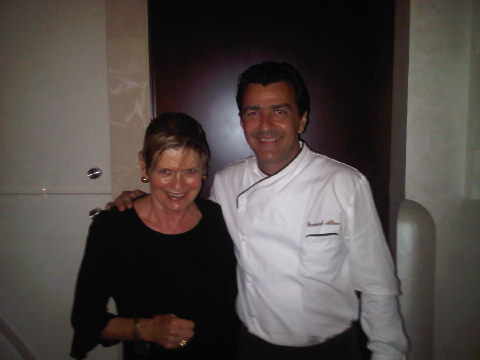 Yannick Alléno is, says the gal, one of the most personable of chefs – which is saying a lot.  And he is international.  Just as fine wines have ‘flying winemakers’ of the calibre of Michel Rolland, so modern-French has a flying food hero, in the form of Alléno.

He runs restaurants in Paris, Courchevel, Marrakech, Beirut, Dubai and Beijing.  His eponymous restaurant at Le Meurice, Paris, a Dorchester Collection hotel, has three Michelin stars. He happened to be making one of his six times a year visits to Dubai, where he oversees all the food at One&Only The Palm Dubai.

First, the setting.  You are actually so far from mainland, original Dubai that you think you are in another world.  You can take a six-minute highspeed boat from its three sister hotels at One&Only Le Royal Mirage or you can drive, or be driven, which takes about 20 minutes.

You head out along the main ‘trunk’ of the man-made Palm and then left to the far end of the outer final ‘frond’.  You pass Fairmont The Palm, and forthcoming Taj The Palm, Jumeirah Zabeel Saray (a sister of the most luxurious hotel in the world) and a very-basic shell of a hotel that is supposedly opening in October, no name yet, no windows yet.  The peaceful One&Only The Palm is therefore a calm oasis.

Best rooms are in the two-floor villas around the horseshoe-shaped edge of the overall resort, which is fringed by 20 yards of soft sand, and the blue sea. Upstairs rooms in the villas have shady terraces: downstairs, say 604, French windows lead direct to an outdoor sitting area, a 20-foot pool and a few-feet walk through seagrass to the beach, and water. 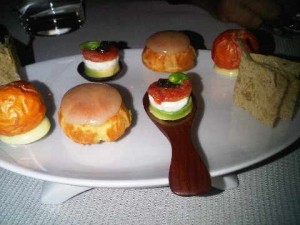 Amuse, by Yannick Alléno at STAY

You look across to the lights of mainland Dubai beyond.  The sensible head for the ESPA , cleverly set as a trio of three-rooms, so that a group of three girlfriends can have treatments together, if they want.  The entire spa area is built around a central pebble-ground garden some six feet across.  The effect is relaxing.

Those without private pools (there are 90 rooms in all), and some with, may have spent much of the day around the main pool.  Interestingly, no food is allowed right by the pool, but if you have bought day-use of one of the fully airconditioned cabanas you can eat and drink, whatever.

Those in the know may then head for the lounge bar in the main Mansion. This has a Noel Coward feel, with tall indoor palms, and semi-private seating areas thanks to well-placed screens, and a good tinkler on the white grand piano. You could well venture to the well-stocked library and its adjacent boutique, the most exciting array of in-hotel shoes for sale since Royal Monceau Raffles in Paris.  You may then have booked for dinner cooked by Yannick Alléno.

STAY, his signature restaurant, is dinner only.  Some of its tall walls are backlit mirror and steel, and giant black chandeliers, from the Czech Republic, hang overhead.  At one end of the room is the dessert station, with chefs actually making up tonight’s creations.

Cream linens, Robert Welch cutlery, stainless salt and peppers and tall Schott glassware make up the table setting, ready for the coming theatrical feast.  When Yannick is in town, you may have, as we had, a set menu, but it starts with little canapés, that could well include one-bite tomato meringue puffs.

The main meal commences.  Tonight the listing – you can eat what you want, paired with wines or not – kicks off with chicken consommé jelly with horseradish foam, and 2011 Sauvignon Semillon Cape Mentelle Western Australia.

This is followed by Smoked salmon balik, a finger-sized portion of fish in potato crust, with a martini glass holding a walnut-sized ball of baby leek cream, and hidden underneath a sizeable amount of Oscietra caviar.  You could then go on to Roast lobster with lemon verbena, girolle mushrooms and preserved apricots, with 2009 Bourgogne Chaumes des Perrières Dupont-Fahn, Côte de Beaune.

For those who still had space, there were then two desserts, a Pineapple and lime pavlova with pink praline (and 2009 Ch Haut-Monteils Sauternes), and a Dark chocolate smooth cream, crunchy tuile and vanilla ice cream (to go with 2009 Maury Mas Mudigliza Languedoc-Roussillon). 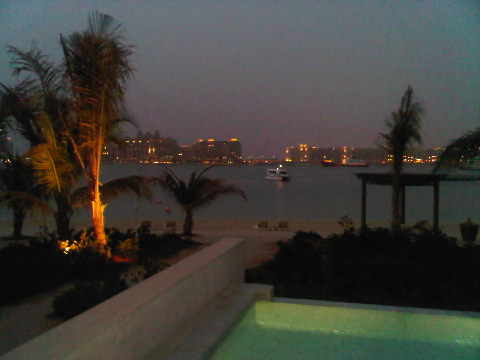 Intermittently Yannick Alléno breezed through as though he had not got a care in the world – he obviously has extremely talented people working for him in the kitchen!  He loves this place, he says, and comes as often as he can.  He only partners with those he admires.  One&Only here, LVMH owner Bernard Arnault at the Cheval Blanc in Courchevel, and so on. Next time I must ask him about his Beirut and China partners – in Marrakech his partner is the Royal Mansour, owned by the King.

I feel royally fed.  Back home, I look across at the bright lights of the mainland, sink into sleep.