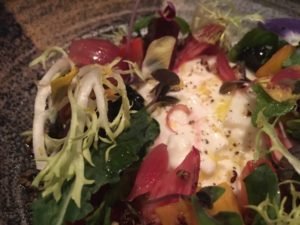 Getting a second Michelin star has made all the difference in the world to Srijith Gopinathan, above, Executive Chef of Taj Campton Place, San Francisco. When that hotel, originally built 1909, was re-opened in 1982 it was known for its food, thanks to its produce-mad GM, Bill Wilkinson, who brought in such chefs as George Marrone, Bradley Ogden and Charlie Trotter. Then, in 1993, Bill Wilkinson moved to the supply side: he bought the GreenLeaf farmers’ consortium, supplying not only Campton Place but all the other top luxury hotels in the area (Bill was such a lovely guy – the gal remembers a tasting of heirloom tomatoes that he organised specially, shortly before he died on July 19th, 2010, at the tragically early age of 68). 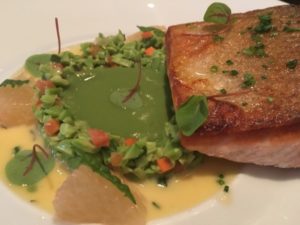 Now, once again, Campton Place Restaurant, in Taj Campton Place, has a shining star. Last October, Srijith Gopinathan, who had got his first Michelin star in 2013, had a telephone call from Michelin. He thought he was going to be demoted but no, he was up from one to two stars. He could not believe it, he told his GM, Ashrafi Matcheswala. She had actually risen up the hotelkeeping ladder through food and beverage – at one time she had headed that department for the massive Taj Mahal Palace in Mumbai, which meant overseeing room service, 11 restaurants, big hotel events and an average of a thousand outside-catered meals a day. 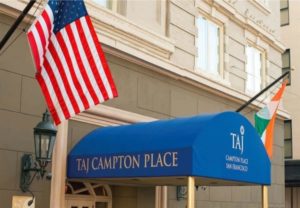 She knows the value of an extra star. Being two-stars has increased the numbers of diners in Campton Place Restaurant by at least 20%, but it has not increased average spend as the hotel is determined to keep prices down – you can get a two-course lunch, for instance, for $39. There has been a big increase in tables booked by gourmets living in the Bay area, especially Indian-Americans in the tech world who are so proud of this new-wave Indian restaurant. And yes, it is new-wave. If you think of curry and chicken tikka masala, this is not for you. I started lunch with an exquisite beetroot and burrata salad, with slightest hints of different spices. 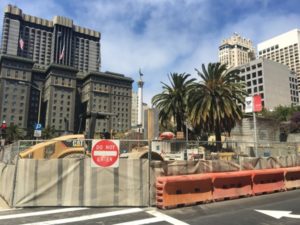 I went on to salmon and edamame, but look at the result, above right.   It looks gorgeous, it tasted gorgeous. How, I asked, did Srijith Gopinathan prepare for his extra star? He toured India, sussing out street food, but there was no sign of street food anywhere here. Will the luxury hotel now go for a third star? Ashrafi Matcheswala shakes her head in a somewhat ambiguous way, but she knows that will require spend, changing the restaurant décor. Never mind, San Francisco is into big projects at the moment. I was amazed to find the Union Square area a Big Dig, the Central Subway expected to open 2018 – somewhere underneath Taj Campton Place, at this time, two massive boring machines, Big Alma and Mom Chung, are hard at work.  NOW SEE A VIDEO OF TALENTED SRIJITH GOPINATHAN, BELOW