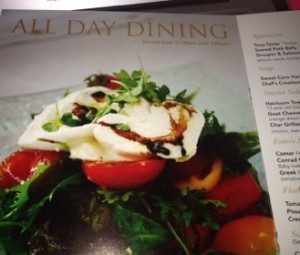 Caprese is on the menu

Does staying in a luxury hotel live up to expectations? In the days of printed brochures many first-time travellers were tempted by glorious photographs – taken with a wide-angle lens – of bedrooms with masses of flowers and a chilled bottle of Champagne (though never Dom Pérignon). Now, online, such images are more realistic. Arriving at Conrad Miami, the gal was enticed by the room service menu with its full-page photos of dishes on offer. The answer, dear reader, is that the heirloom tomato caprese with arugula and watermelon, and balsamic, looked exactly like its promise, and presumably the balsamic was 15 years old, as stated.

Breakfast, with a sculpture on the end wall…

Conrad is the luxury of being yourself, I have been told, in Bali, Hong Kong, Koh Samui, London, Macau, Singapore and Tokyo. Here, you can breakfast off a Monte Cristo sandwich, a brioche covered in batter and served with sliced ham, provolone cheese, grape jelly, all topped with two fried eggs. Or you can do as I did, head for the $24 buffet, which had delicious plain Greek yoghurt and seriously whole grain bread among the toasting options. Look at the art on the end wall, by the way. What had been a somewhat utilitarian building has been magnificently titivated by palm trees, art and more. 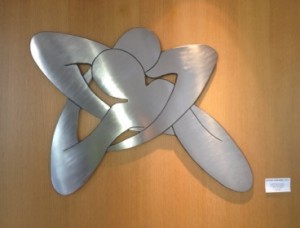 The dozen or so metal sculptures attached to walls on the hotel’s 25th floor living-activity area are by Italian Antonio Cersosimo, and they remind me of Matisse‘s celebrated blue on white shapes, the ones that always make you smile. It is the same here. The contortions of the shapes really appeal, and they are a reminder that this is a lively hotel – so lively that on Tuesday, November 4th, 2014 Conrad Miami hosted a lunch given by the French Ambassador to the USA, Gérard Araud.

The lunch was a highlight of Miami’s seventh annual French Week, where French Business & Culture Meet, running October 23-November 13, 2014. At the 203-room hotel, His Excellency and his lucky guests were greeted by some of the 200 thoughtful team members, and by Marilyn, another one of the wall hangings, this time by Marcos Marin of the Gallilani Gallery (I can vouch for that word ‘thoughtful’ as when I came to the 25th floor at 4.45 a.m. to print a boarding pass, at the big Mac next to front desk, night agent Javier Gonzalez came over to offer coffee, which he brewed specially).