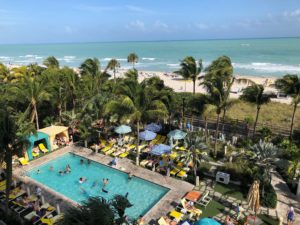 Looking down at a pool

The Confidante Miami Beach, an Unbound hotel (part of Hyatt, which also owns the complex) is something of a conundrum but it fits into the luxury hotel sphere, says the gal, primarily for its team.  They are SUPERB. Anyone will do anything at this 354-room hotel.  The GM was sadly away but his deputy, Matthew Brink, relayed how that very day he had bussed tables and help strip beds. He described how every day housekeeping teams, before starting work, are motivated by exercises to Cuban, or other, music, and they are incentivised with, say, dining vouchers – and the whole 256-strong crew is so team-spirited that you feel if they were playing soccer they would push FC Barcelona off the top global rung .  In today’s luxury travel world, it is the PEOPLE who encourage top travellers and it is no wonder the hotel has a lot of repeat business. Also, specially for ‘snowbirds’ escaping the winter weather up north, this is exactly the kind of friendly, and family-friendly, characterful hotel that they revel in  Look at the view down from corner room #628. 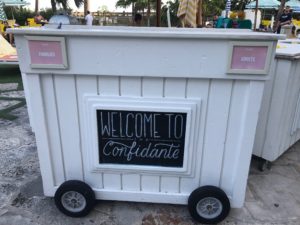 Familes to left, adults-only to right

Let me give an example of how the team works. Soon as I had checked in I had a small issue that needed a spot of dry-cleaning. No problem (nothing is a challenge, here, it seems). Within five minutes, I had four concerned managers squeezed into my not-exactly-spacious room, but they took the garment, a Nicaraguan promised to dry-clean it personally and it came back good as new within about six hours.  Partly to while away the time I went down to the pool area. There are actually two adjacent pools, one adult-only. Two simple signs on a towel cart as you go into the pool area tell you, immediately, which pool is which. Brilliant.  I went through the whole pools and lounging area to the public boardwalk that runs from 5th Street up to 46th Street (Confidante is on the corner of Collins and 40th Street) and could have run, jogged or walked the full four miles.  As I went I looked through the dunes to the beach, dotted with lifeguard huts – see the photo above. 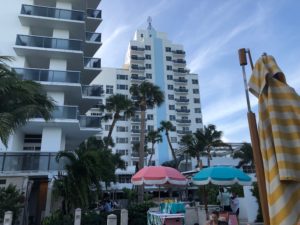 One building still has its original radio mast

On my return, using my pressure-pad room key to get from boardwalk to the pools area, I looked up at the hotel.  It was originally three buildings, dating back to the 1930s.  One tower is still topped by a radio mast, once used to talk to the airport, which apparently would radio the hotel when VIP guests were on their way.   In its lifetime the hotel has variously been called the Lord Tarleton, the Crown Hotel and then, after a spell as apartments, it reopened as Thompson Miami Beach before being bought and re-flagged by Hyatt in 2016.  Elements of its past have been deliberately retained, as in retro corridors now partly hung with collections of local art which change every eight weeks.  Bedrooms are mélanges of bright patterns, not necessarily subtly complementary to each other but reminders of what was considered stylish in mid-20th century. 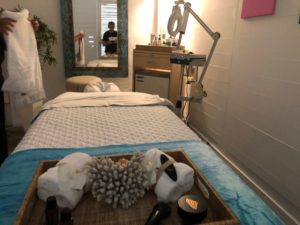 Ready for a Miami Beach facial

One block has a memorable indoor-outdoor gym on its 11th floor rooftop: the fresh-as-air part has rowing machines and Sobe Kick boxing batons – there are scheduled boxing, and Green Monkey yoga, classes up here, outside. Next to this-all is the two-room spa, which sensibly calls its signature facial Miami Beach, with Imace products (yes, of course everyone wants to look like all those lovelies on the boardwalk). Sensibly, too, many add on crystal energy stone therapy, which implied a pink stone rolled over my body to inspire love, trust, clear communication.  Come to think of it, they are always inspiring something or other, here. Matthew Brink and an equally-lively colleague, Becca Tash, are more excited than ever right now. This month the hotel opens its 250-seat Carmen Miranda ballroom, converted from nine bedrooms. It also opens a second restaurant, Wild Palms, which will add an alternative to the very-busy Bird&Bone all-day American diner. I started my own day with complimentary coffee from one of two push-pots in the lobby, and like others threw myself back into a tan leather sofa – oh so 1950s! – to read today’s Wall Street Journal. This is certainly a characterful luxury hotel. SEE WHAT I MEAN IN THE VIDEO, BELOW, OF ROOM #628