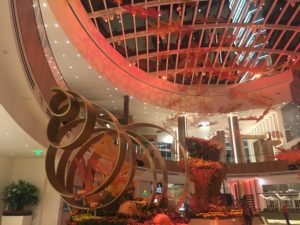 A view of the giant Conservatory

The newest luxury entertainment in the Washington DC area is not actually in the capital itself; it is fortunately 15 minutes’ away, at National Harbor, Maryland, which means MGM was able to get a gaming licence. It opened, says the gal, just under a year ago, on December 8th, 2016, and is already an integral part of the growing MGM family (tonight, Friday December 1st, 2017, many of the 4,000 National Harbor team members will be thinking of their Las Vegas colleagues, who are helping host the Vegas Strong Benefit Concert at T-Mobile Arena, to support the Las Vegas Victims Fund – acts include Cirque du Soleil, David Copperfield, Penn & Teller, Boyz II Men, The Killers and more). MGM National Harbor is, like its Vegas siblings, based on art – see, above, the giant greenback, US note, a stainless sculpture by Liao Yibai, born in Jiangan in 1971. 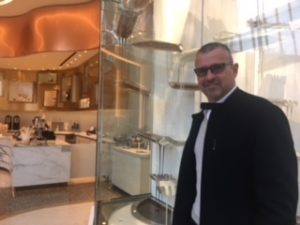 Anton Nikodemus and the biggest chocolate fountain in the USA

Some of the art, notably the decoration of The Conservatory, is seasonal. This two-floor circular space is heart of the entire MGM National Harbor complex, and it is currently decorated with $1.4 million-worth of Autumnal, Fall, foliage, fake and real. Right here in The Conservatory is the patisserie, where I was able to get outstanding and much-needed coffee at its 6 a.m. opening. One end of the patisserie holds the glass-walled chocolate fountain, the largest in the USA, with dark, milk and white chocolate falling down from one chute to another and another. Leading off the Conservatory is a walkway of retail, including the first-ever SJP Sarah Jessica Parker shoe store, and Breitling and more. Another walkway takes you straight to the casino, where it seems every slot machine and every table is busy – there is even a board to post names of those waiting to play poker. The casino is so successful it is rumored its floor size will be almost doubled next year. 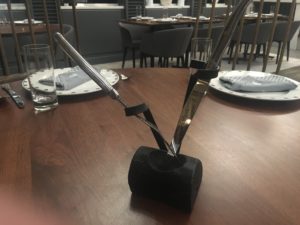 I met up with a long-time friend, Anton Nikodemus, who heads MGM’s regional resorts – he is currently planning the Springfield concept that should brighten the eyes of many Massachusetts gaming enthusiasts. He filled me in on the complexity of this, National Harbor, operation, and how they had 60,000 applicants for 4,000 jobs. As everyone could actually apply for two roles, so there were 120,000 résumés – they have spent $5 million converting a disused school building into a talent centre. Then I returned home, for The Conservatory is attached to the spear-shaped glass hotel. Roughly half of its 308 rooms are reserved for high-rolling gamers, who have a really agreeable VIP lounge staffed, it seemed, entirely by charming Filpinas who simply could not do enough for you (would you like water, or coffee?). Room 22-022 was comfortable, and I liked having books with all-black covers, say Henry James: an Illusion, by Denis Flannery, that provided artistic appeal as well as the written words. Honestly, anyone staying here never needs to go outside, but that is the intent of an integrated resort. As change from the tables, there is a theatre, plus that retail, and of course dining, seven choices in all. 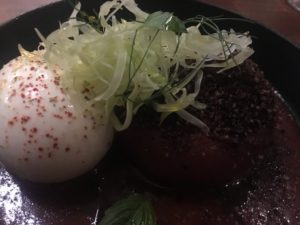 I was with the head of hotel operations, Patrick Fisher, and we chose the Voltaggio Brothers Steak House, by Bryan and Michael Voltaggio, two local siblings with considerable television following who are working together for the first time – and, good for them, they actually visit the restaurant regularly. Several rooms are deliberately themed as living rooms, dining rooms or, where we ate, the kitchen (who else would have real Laguiole knives and forks as table decoration in a KITCHEN?). Popular menu items included the seafood tower, and a memorable beefsteak tomato with burrata, and I loved the steaks ranging from eight ounces (USDA Prime filet or American Wagyu flat-iron) up to 22 ounce (USDA Prime dry-aged 45-day bone-in ribeye, perhaps with a beer-naise sauce). It was an overall cheerful, happy meal, partly because everyone was enjoying themselves. Weekends may bring 10,000 visitors to the complex and the carparking cannot cope, apparently: at first team members were not too happy at having to give up their parking slots, and be bussed in to work, but they soon started smiling when they realised that more visitors means more tips. This is, overall, a cheerful place, for those who visit, those who work here, and for the financial guys behind the scenes counting the dollars rolling in. I had a simply lovely time, which continued as I was taken back into DC by a hotel driver who found that after working 14 years in a law office he was, as he said with a big laugh, ready for a change and he wanted to enjoy life. NOW SEE A VIDEO OF ROOM 22-022