Hans Bruland, on the tenth floor rooftop of 'his hotel', shows off his neighbour, the White House

Not since standing so close to the Taj Mahal in Agra has the gal been in close proximity to a world monument.  The best viewing point for a close up of the White House (the one in Washington DC, in this case) is undoubtedly the tenth floor rooftop cabine at the Hay-Adams.

In January 2011 the hotel, with the full approval of the secret service – who apparently did not like the fabric tent that was sometimes put up there before, for special events – built an amazing permanent structure.

It gives a C-shaped venue, probably 100 yards across the front, the same along 16th Street, across from the president’s spiritual home, St John’s Church – and a slightly shorter length at the other end of the building.

With an exterior deck about four feet deep, and ceiling-high pull-back glass doors, you can feel you are up there, in your element among the elements.  With interiors that are cream and soft green rising to slightly-angled ceiling panels, you feel surrounded by discreet wealth. 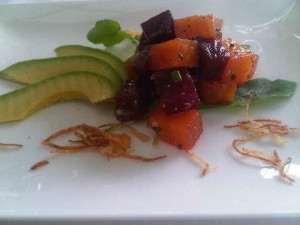 Avocado and baby-beet salad, and 'that view'.

This is actually what the Hay-Adams is all about.  It was built in 1928, in Italianate style, on the site of two adjoining homes, belonging to good friends John Adams, son of John Quincy Adams, and his good friend John Milton Hay, one-time assistant to Abraham Lincoln and Secretary of state to both McKinley and Teddy Roosevelt.

It is now owned by Bernard Saul, whose real estate includes Hilton’s headquarters – he also owns Chevy Chase Bank, which he started in 1969 in a trailer.   Saul goes for discretion.

Public areas still have a lot of the original oak paneling, and the eight floors of rooms are all pretty similar, with palest primrose and beige and lots of soft colours (the designer, Thomas Pheasant, is a residential specialist).

Obama as Lincoln, by Matt Werner, in the Off The Record bar.

It is a Leading hotel, run by a one-time chef from Munster, Germany, the charmingly ambassadorial Hans Bruland. The two of us lunched with that view, looking down at the White House (others get married up here, in the tenth-floor beauty). We went down to the basement Off The Record bar, a deep scarlet hideaway where politicos and lobbyists meet and strategize.

The walls bear lots of original Matt Werner politico.com cartoons – love the one of Obama as Lincoln.  In fact the Os lived in the Hay-Adams after his 2008 presidential victory while the White House was being de-Bushed.  Is it coincidental, in view of St Patrick’s Day being tomorrow, that the White House was designed by an architect from the Emerald Isle, James Hogan?

Also interesting is the fact that this week’s special guest there was David Cameron, UK Prime Minister – and it was the Brits who burned Hogan’s building in 1814 (it was restored, of course).

Wonder if Michelle Obama had time to fill out a customer survey on the hotel? Today’s New York Times has an article about such surveys.  ‘Businesses of all sizes, desperate to lock in customer loyalty, see surveys as a window into the emotional world of their customers and a database that will offer guidance on how to please them’.

The article cites one woman who has started a blog about ‘Infant who begins Babies R Us customer satisfaction survey dies of old age’…..  The busier the customer, be it kids’ clothing or a luxury hotel stay, the less that person has time to fill out a survey, which surely means that the survey only reflects the views of the under-employed or over-grievanced fringe.

Girlahead prefers to say outright what she likes.  She LOVED the Hay-Adams, which made her feel, literally, on top of the world.  She then LOVED Four Seasons Washington DC (and not only because its boss, the full-tilt Christian Clerc who speaks and shares ideas at maximum rate, later wrote to say she looked ‘fabulous as always’).

The Four Seasons' Presidential Suite, with bullet-proof glass and private street entrance, of course has an office, with the best computer and desk-top sculpture

This hotel, a brick structure in Georgetown, is also regular home of politicos and lobbyists, plus such entertainment names as Brad and Angelina who think of themselves in both those categories.

The lobby goes on for ever. It now has a working fire, across from five blank canvases, about six feet high, four feet across. Walk past them and they look blank, shades of grey.  Study them hard and female faces, one per canvas, appear.

At the back of the lobby the entertainment area is a bar, with high-up banquettes, looking through the serving area with television to a Bourbon Steak restaurant, plain wood tables, Michael Mina menus. The bar area, at 1715, is full – with politicos-lobbyists.

We escape, to the space of the new Royal Suite, made from former leased-out offices. Silver, beige, marble and art.  The basic 3,500 sq ft area comes with two bedrooms, dining for ten, an office and gym and a large private terrace with firebowls (there are working fires, indoors, too).

You have bullet-proof glass and a private entrance down to the street. You can also add on extra bedrooms, to give you 12 beds in all.  Even Brangelina would be able to cope, here.

Time to get real, girl. While Christian Clerc, therefore, rushed off to practice for his performance in tomorrow’s

Washington DC SunTrust Rock’n’Roll USA Marathon, she merely picked up her umbrella, took off its plastic disposable wrap and padded out into the Washington evening.