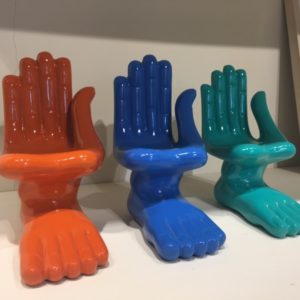 Memories of Mayakoba, or looking back on the wonderfully useful networking that is the annual ILTM Americas, held last week. It was a sell-out, with 300 luxury suppliers meeting, doing business and having fun with 300 buyers of luxury travel, in other words top travel advisors. Earlier in the week there were, typically for this time of year, amazing storms (on one occasion the gal was merely cycling from gym to villa at Fairmont Mayakoba, honestly no more than seven minutes total, and she was completely drenched by a sudden downpour). Fortunately it did not rain for lunch at El Pueblito marketplace, where one of the most impactful boutiques is the Báal Studio art gallery, currently showing hands and feet in a most Alice In Wonderland kind of way. 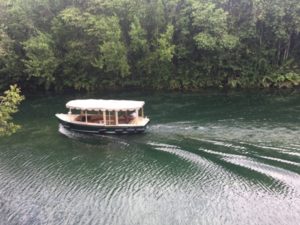 Watching the boats go silently by

Fortunately there was time, not enough but at least better than nothing, merely to sit on the terrace of upstairs villa 626 and look down at the river. From time to time some of Mayakoba’s 150-plus magnificent bird species swam or flew past, and there are irregular boats, taking guests from one part of the complex to another, or ferrying workmen clearing some of the undergrowth that is trying to take it over, possibly by throttling it. Last year I had a working breakfast on a boat: this year we decided there was not time, sadly. For those getting married here, at El Pueblito’s fully-consecrated church, what a lovely way to go there, or back afterwards, by boat. 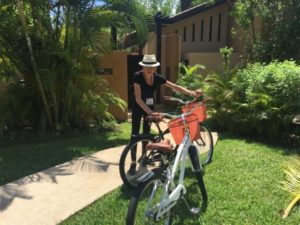 All hotels have bikes

Transport at the three Mayakoba hotels, Banyan Tree, Fairmont and Rosewood, is, for guests, limited to boat, walking or biking. At Fairmont, bikes are first-come-first-served and even though mine had a lock on, it went missing one night (it was found, very quickly, at the building two along from me) – I have heard stories of guests taking precious bikes into their rooms, which is easier if you are at ground level rather than, as I was, up 18 wood steps to the upper of the two-floor buildings. Bikes at Fairmont are mostly white BMW: Banyan Tree has black, and white, city bikes, and Rosewood has all-white. 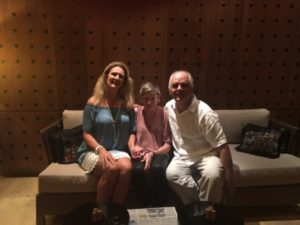 The whole of the 1,605-acre Mayakoba estate, which not only has its three luxury hotels but 11 miles of beach and golf and so on (plus owned homes), is now managed by long-time Hyatt hotelier, Australian Carl Emberson. For this passionate golfer, and his Belgian wife, Sabine Steverlynck de Emberson, living here is bliss, and he, particularly, is happy as a sandboy arranging events. Coming up in order is a weekend of cycling, October 14-16; Riviera Maya Beer and Street Food Festival, October 22nd, and Mexico’s only PGA Tour, the OHL Classic, November 7-13, which has a purse of $6,200. Next year there is a wedding fair in January, and as well as all the food events for 2017, a Wedding Fair, January 16-17, 2017; and Mayakoba Playa Fest, July 22-25. 2017 AND he has time to write his www.carlemberson.com blog