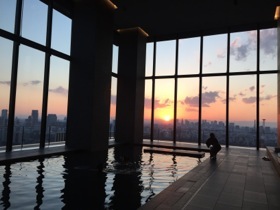 Sunsets can provide a lasting memory of a luxury hotel – or just one of many highlights of a stay. At Aman Tokyo there are a myriad of memories. Arrival might be by rickshaw, pulled at what seems like lightning speed through the streets of Chiyoda-ku. At the hotel you rise, in the first elevators in any Aman, up to the 33rd floor lobby, which is a vast rectangular space, pale wood and basalt walls, topped by a mammoth ceiling of translucent washi paper. The gal was recommended to be in, or at, the indoor pool as the sun set, and it was indeed worth it, an appetiser, so to speak, before heading to The Restaurant by Aman for Eiji Ohata bouillabaisse. This is, by the way, a distinctly Japanese variant on Marseille, namely a 2.5-inch square of white fish slow-steamed at 74°C, with a hint of black samphire glasswort and a little red puddle already poured around it. 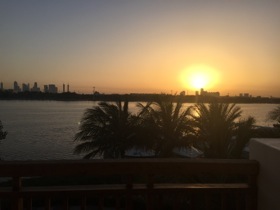 There are moments when you know the light is perfect. This could be, as I found cycling through Amsterdam last month, when the setting sun just begins to give a golden hue to some of the buildings, including such favourite hotels, in alphabetical order, as Andaz, Conservatorium, Hotel de L’Europe, Pulitzer (a list that now, of course, includes Waldorf Astoria Amsterdam). Then, as the colour intensifies, the higher you are, or the larger the space around, the more glorious the effect. For the highest sunset-view in the world, head – for now at least – to the 118th floor of The Ritz-Carlton Hong Kong. For the most space around you in New York, Trump SoHo is hard to beat as The Donald owns all the airspace, around 360 °. In Dubai, sunsets across the creek from Park Hyatt Dubai are hard to beat. 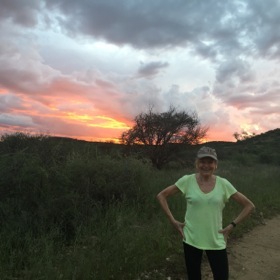 I remember the sunset while going for an early-evening run in Windhoek (only two hotels of note in the Namibian capital, incidentally, led by a first-class Hilton). I remember the green flash on the horizon as the sun sinks into the water, as seen from the amazingly-resilient Phoenicia InterContinental Beirut, and also from many lovely Hawaiian properties. At Anantara Phuket Layan, Mark Hehir had a perfectly chilled bottle of Dom Pérignon which three of us, sitting in old-fashioned deck chairs, on the beach, finished while watching the sunset. At the then-Raffles Canouan, Louis Sailer – who has just published a splendid hoteliers’ primer, From Apprentice To CEO: A Complete Guide To The Hospitality Industry – took chilled Veuve Clicquot out for a sunset cruise. 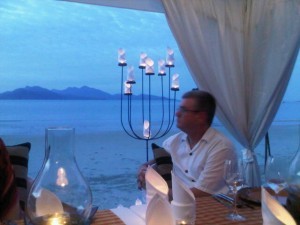 Sunset cruises, or anything sunset, have a magical appeal – wonder why luxury hotels do not offer more experiences with the word ‘sunset‘ in them? Sunset safaris, stopping for a gin and tonic at an appropriate time, are definitely a top memory of the last tour I did of Belmond‘s safari lodges in Botswana. Being left alone, apart from those staying in the other 30 rooms at Machu Picchu Sanctuary Lodge, when all the thousands of day-trippers to the historic ruins have been bussed back down to Aguas Calientes… so many sunset memories.