The gal was in for a day of water in Istanbul, and it was to be a day to remember.

First, she awoke in her very thoughtful room at the Mövenpick, went into the bathroom and stood inadvertently on the yellow plastic duck that was sitting minding its own business on the bathmat on the floor by the double-sized, lit candle-surrounded bathtub.  That is a much better wake up than any alarm clock.

Mövenpick coffee that now comes in a sensible mug (keeps the flavour in, and keeps the temperature hot). 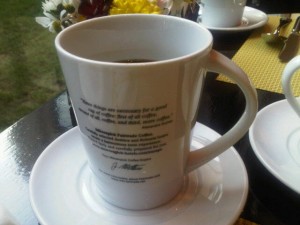 The mug is inscribed with a quote from Alexandre Dumas. ‘Three things are necessary for a good cup of coffee; first of all coffee, second of all, coffee, and third, more coffee’.

As so always in luxury travel, it is the little things, like the playfulness of a yellow plastic duck and really good coffee (and the fabulous strong-flour breads at the breakfast buffet) that make a stay memorable.

The Italian food at Mövenpick Istanbul is also outstanding, thanks to newly-arrived chef Giovanni Terracciano, whom I had first met at Palladio in Portman Ritz-Carlton Shanghai.  It is a small small world, this itinerant life.

After Giovanni’s Sunday brunch, when he was there personally, supervising the open kitchens and talking to adults and watching their kids being entertained by a clown was very adept at blowing up balloons into funny shapes, it was time to take to the water.

Deniz Omurgonulsen and her husband Noyan Altug have a 35-foot boat, a sleek beauty with one forward cabin and a glass-walled above-water ‘living room’ with a 50-inch plasma flat screen, and plenty of outdoor space, fortunately with a Bordeaux-style heater that turned out to be so necessary at this time of year.

We started off from the deck of Kempinski Ciragan Palace in the Besiktas area of Istanbul – more, anon, of this luxury hotel – and quietly made our way east along the 30-mile Bosphorus.

On our left was Europe.  On right, far across the water, was Asia (Kuzguncuk is immediately opposite).  Being a Sunday there did not seem to be quite as many  container giants as usual.

The European waterfront was packed.  Every available space was taken up, with happy people wrapped up in thick coats and scarves sitting having coffee or something stronger, and others strolling along promenades. 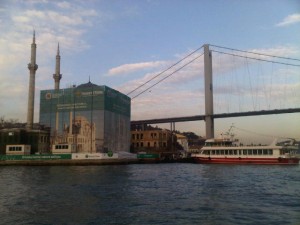 About to sail under the First Bridge

Wherever the road came close to the water’s edge the solid traffic was – solidly stopped.  It was a case if you have a car, take it not for a ride but to sit for what could be hours surrounded by other vehicles (Istanbul’s traffic is the city’s biggest hurdle to tourism and commercial growth).

And in between were houses, some of them very old.  Right under the First Bridge, across to Asia, is an old, four-floor mansion where the lease sold for $110 million.  That is correct, US dollars… and is it true that it will be a hotel run by Vienna-based Turkish caterer Attila Dogudan, who cooks for the Paddock Clubs at most of the Formula Ones around he world?

Passing what was once Ataturk's yacht

Istanbul has, incidentally, been dropped from the Formula One circuit – what a waste of money that particular circuit was, went round it once myself). International lawyer Zafer Karaca, one of our party on the boat, says during Turkey’s financial crisis in 2001 house prices dropped but by 2007 they were back higher than ever.

Among the treasures we passed was an immaculate old mansion, probably worth at least $300 million, that is, guess what, the official residence of the Egyptian consul in Istanbul.

We passed MV Savarona, the 446-ft one-time luxury State yacht, designed by Gibbs & Cox in 1931 for Emily Roebling Cadwallader and bought in 1938 by the Turkish Government for Ataturk, who spent his last few months on it.

It was dark by the time we disembarked

This was certainly a special Sunday, and, considering Istanbul had been carpeted in snow, and the airport closed, only three days before, we thanked our lucky stars for the clear weather.  We drank a toast, in tea, coffee and excellent Turkish red, to the relevant meteorological powers-that-be.

Shortly after passing under the First Bridge we came to Suada, a middle-of-the-water structure about the size of a football pitch that is a pleasure venue built on a base of natural rocks – it could, therefore, be said to be an island.  We passed under the Second Bridge, and then sadly had to turn and rush back to starting point because of commitments that evening.

And it was dark when we disembarked at the landing stage of Ciragan Palace Kempinski.  We said farewell to Deniz and Noyan, a marine engineer who had built the boat about 12 years ago in honour of his mother (his father is a marine captain in Izmir).