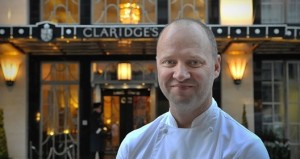 This is Simon Rogan, the charming culinarian who has brought that luxury hotel Claridge’s to the forefront of creative cooking. Yes, the hotel makes waves in a variety of ways, notably for its outstanding reality television series that featured not only GM Thomas Kochs but also The Emperor of Japan. This year, once again its lobby Christmas tree is decorated by Dolce & Gabbana, attracting every celebrity and aspirant to be photographed near it. But it is the 90-seat Fera at Claridge’s that, says the gal, has made the hotel even more cutting edge. 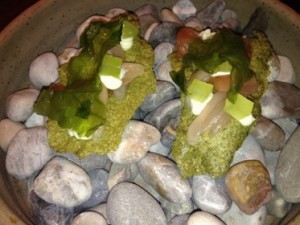 No, don’t eat the rocks…

Simon Rogan is a Southampton son who was based at his signature hotel-restaurant, L’Enclume in Cartmel, Cumbria, when Claridge’s ultimate boss, Stephen Alden, CEO of the Maybourne Group, heard about his skills. He seemed, says Stephen Alden, a natural fit for the Claridge’s space, which, like its adjacent 12-seat private dining room, was decorated by Guy Oliver (a big window through to the kitchen lets you see the chefs hard at work). Simon Rogan is famed for foraging, and he has his own farms up north, so you know everything is seasonal and fresh. 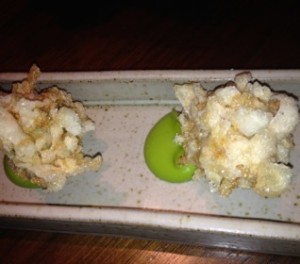 His seven-course tasting menu, which changes daily, might have Cartmel Valley smoked venison with pickled carrots, or Goosnargh duck with cepes. There might be Dorset truffles. An amuse, with the chef’s compliments, might be served on a bed of river rocks (from the River Piddle in Dorset, perhaps?), or it might arrive on a board, decorated with tiny purple violets. Every dish, right through to an Aerated rosehip mousse with sweet potato and white chocolate dessert, sounds appetising, and it is. It is no surprise that the restaurant, which opened May 2014, has already garnered a Michelin star, and it is packed for lunch and dinner. 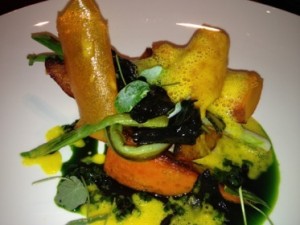 .. and an all-vegetable main course

He does vegetarian, too (don’t you think this would make a divine hat for that special wedding, or perhaps Ascot?). Even though you have to go through the luxury hotel’s glamorous lobby to reach it, there is certainly 100 percent feeling, here at Fera at Claridge’s, that this is a freestanding, not a hotel restaurant. It is worth noting that the servers are, however, all hotel employees. The women wear chic black cocktail dresses, which look especially great at one p.m. on a dank London day, and the men nearly all sport beards, about which I will not comment, even at one p.m. when I am eating some of the most creative, and genuine, food in London.