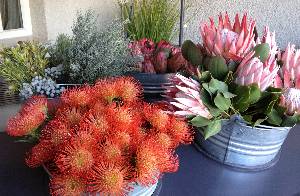 Proteas on the flower cart outside Cape Grace

A display of South African proteas greets you outside Cape Grace – they are on a flower stand that the luxury hotel puts on show all day long.  The flower cart, which looks like something out of My Fair Lady, not only supplies flowers for the hotel but also for passers-by who want to buy a souvenir.

Clever idea, thought the gal. Proteas, also known as sugarbushes, were named in 1735 by botanist Carl Linnaeus after the Greek god Proteus, who could change his form at will – there are so many different forms of protea.  Typically, they look like tennis balls that open up to reveal yet more layers inside. 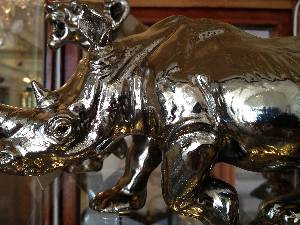 Cape Grace, a Leading hotel, reminds you immediately that you are here in Cape Town, you are in South Africa, you are in southern Africa (a display of silver animals by the Harare-based jewellery designer and sculptor, Patrick Mavros, whom I met when I was last in the Zimbabwean capital, is in one of the vitrines in the hotel’s lobby).

Yes, Cape Town, right by the marina and the V&A Waterfront, named for Queen Victoria and her second son Alfred, who inaugurated the harbour in 1860.  He called the first basin after himself, the second after his mum.

The hotel looks out, front and back, at water.  As soon as it opened in 1996 the Clintons, Bill and Hillary, came to stay, which immediately put it on the map.  Since then it has been full, or at least 60 percent full, of Americans.  They love its quaintness, the many whimsical Cape Dutch touches that designer Kathrin Weixelbaumer put in. 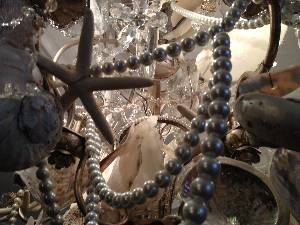 At every one of the four elevator lobbies there are, well, displays. On the third floor you have fake windows with real curtains, and a four foot tall watering can. On the top, fourth, floor, you have a rocking chair casually draped in blue and white printed material. 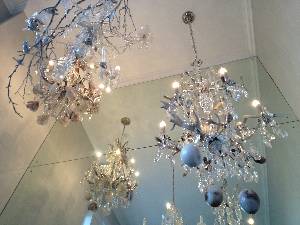 One is strung with white cups, real china cups.  Another has horns and lots of strings of pearls.  Imagination has run riot, Kathi, and it works.  Yes, I can call her Kathi as I met her on that trip to Harare.

She and her daughter Klaudia were talking to the Meikles’ big boss Brendan Beaumont about the redesign she is doing of that iconic 1915-vintage hotel.

And Meikles, the public company that still has the Meikles’ family trust as a 43 percent shareholder, owns not only the Harare beauty but also this, the Cape Grace. 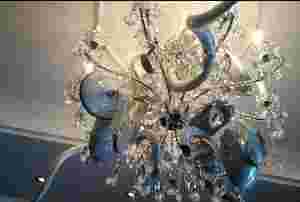 So there you have it, a 122-room hotel  and a breakfast buffet that lives up to the Cape Town norm – eat your Cape seeded bread toast and marmalade, from Stellenbosch, looking out at the cruise ship-like swimming pool outside.

At afternoon tea, there are cakes-of-the-day under tall glass cloches. Back in your room, supplies thoughtfully include a whole lemon, for your G&T (oh so colonial), and a proper paring knife to cut it with. You have a couple of paperback novels chosen just for you, and local bathroom goodies, by Charlotte Rhys. 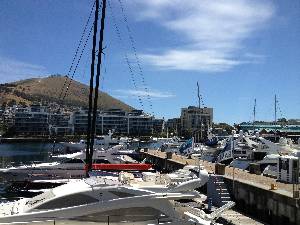 Looking out of your window at this luxury hotel you see the water, with Table Bay to one side, and you understand why 17,000 readers of the Daily Telegraph in the UK, mature Brits who very definitely have healthy-bread toast and marmalade, though home-made, at their own breakfasts, have just voted Cape Town the best vacation city in the world.  Oh, by the way, where else does a hotel GM say, as Sandy Pollard does here at Cape Grace, ‘I absolutely adore the people here…. It really is like coming home every day when you see those wonderful smiling faces’?