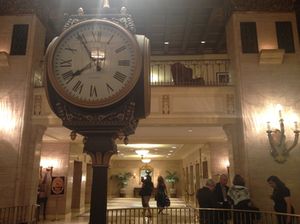 Clocks are meeting places at major rail termini – so why don’t airport designers put in a simple, easy-to-see clock? It is a curse of modern travel how often the gal and a driver do not meet up, say because there are two exits from the baggage hall. When it comes to luxury hotels, there are some unique meeting places, say the two filled bird cages at the Biltmore in Coral Gables FL, but there are also significant clocks in such icons as Waldorf Astoria New York and, as shown, at Fairmont Royal York in Toronto. 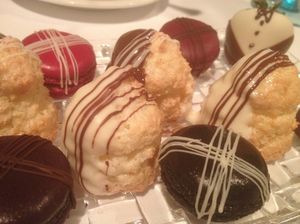 Macaroons, to an 85-year old recipe

This hotel now has 1,348 rooms, and when it is busy, as it was a few days ago, it is impossible at times to walk through the lobby without bumping figuratively into a couple here, a couple there. Thank goodness for the hotel clock, my meeting venue all day long. 85 years old this very year, several historical memories are being recreated. Here, for instance, are macaroons made to the exact recipe used in 1927. Presumably at that time they were served to most of the guests, but not to the unlucky residents of the 12-bed full working hospital that was incorporated into what was then a 28-floor building. 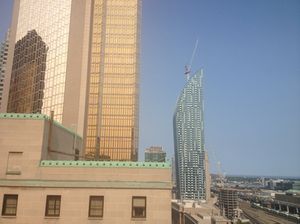 There is working medical still today, but it is not part of the hotel. The semi-basement area, which has a popular Benihana restaurant, also houses a plastic surgery unit, which seems like a jolly good idea. Stay here for a meeting and in your lunch break pop down for a quick botox…. Another important reason to choose this hotel, as of April-May 2015, is the opening of the non-stop airport-Union Station rail express. The 25-minute train will run every 15 minutes, and the hotel is connected underground direct to the station. Until then Front Street, in front of the hotel as it happens, is one big building site but the wait will be worthwhile. Note, however, that the current airport bus service, which drops you directly at the hotel, dies this November (2014). 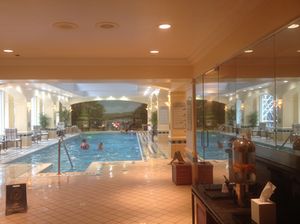 Looking through to the hotel’s pool

This is a luxury hotel that is a real pillar of the community. It has had beehives up on rooftop terraces for years but now it is partnering with local charity Burt’s Bees to establish bee hotels up there. Lost your hive, little one? Fairmont Royal York will put you up, for free. Whenever I go back here I know there will be honey-dishes on all menus, and I can now buy bee-infused lip salve. I also know that I will always leave healthier than I arrived, thanks to the 24/7 gym, and the pool, and the proximity to lakeshore running – as a President’s Club member, I have Reebok workout clothes, correct size, waiting on my arrival (and the bikes are BMW). I also know that I can trust my 3.45am breakfast from room service. Yes, he arrived on the dot, with a smile and flowers on the table, and a night porter delivering newspapers said, also smiling, would I like one?