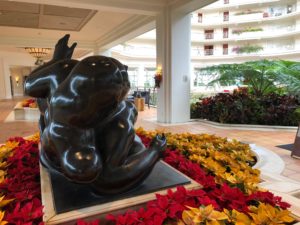 Welcome from the Botero queen

It was one of those lucky things. A couple of days before the good ship Navigator arrived in Kahului Harbor the gal realised that one of the world’s most passionate hoteliers, Allan Federer, had recently taken over the luxury Grand Wailea, a Waldorf Astoria Resort. Jump forward 48 hours to a torrential downpour with three inches of water on the dock alongside the ship, but less than an hour later the sun was shining on Wailea, west coast of south Maui. There was the boss himself, above, and there, as always, was one of the resort’s nine gorgeous Botero statues, left. This one is a human queen in repose – there is a standing queen at Four Seasons Miami and huge Botero horses both at Sagamore Pendry in Baltimore MD and at St Regis in Kuala Lumpur. 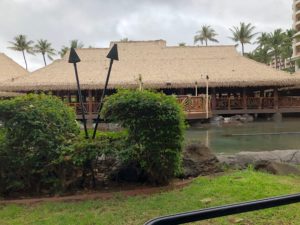 Since he arrived, Allan Federer has been working hard on elevating food quality at this amazing 60-acre resort, which has 80 gardeners led by a PhD agriculturalist. The Polynesian-style pampas-roofed Humuhumunukunukuapua’a restaurant, named for Hawaii’s state fish, is dinner only so we went to a really cheerful beach restaurant. There were big family parties all around – the resort has 780 bedrooms and 68 villas, which have anything from one to four bedrooms. Over the holiday period said Allan Federer, he is therefore likely to have about 3,000 guests on site. I am sure many of them would, like me, choose the onion rings, as light and fluffy as the ones in the Gordon Ramsay brasserie at Le Grand InterContinental in Bordeaux. 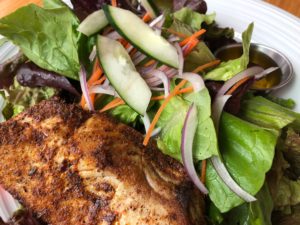 I then went on to Monchong, a sickle pomfret harvested in Hawaii both by longline and bottomfish handline fisheries – it has high oil content which gives it a particularly buttery flavour: mine was served on Kula Farm greens, from a fourth-generation Country Farm on the slopes of Mount Haleakala, Maui. Allan Federer then, like about half the tables at this luxury hotel’s family-style restaurant, insisted on ordering a banana split, with a difference. As the video below shows, this banana split is served in a pineapple half. After a century of significant pineapple production on this island, by the way, Maui Land & Pineapple, which harvested over 92,000 tons in 2008, closed down in 2009. Yes, there are changes on Maui since I was last here. Allan Federer is even thinking of getting rid of the resort’s wedding chapel as young Japanese couples now prefer to get married on the beach, he says.