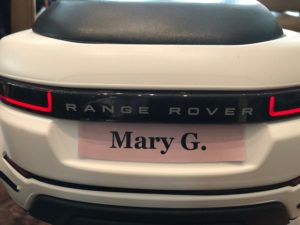 The uninitiated could well think that Paris is all about eating and drinking, lots of fashion – and far too much smoking added in. There are other more positive points. First, in public streets there are metal litter bins, lined with transparent-green plastic so you can see their contents, every 100 yards, which helps to keep the city unusually clean. Next, even streets as central as those around place de la Concorde and intersecting rue du Faubourg St Honoré have tiny shop-fronts, fruit stalls next to luxury brands, all blending harmoniously. This gives Paris’ luxury hotels unique surroundings. And the people running those hotels have above-par senses of humour (see the miniature Range Rover that greeted the gal at Royal Monceau Raffles). 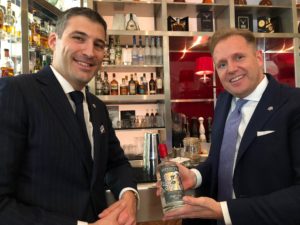 Aaron Kaupp, GM of this hotel, has a ten-month old daughter Chloe but he was hot on the kids’ niche before that. Parents bringing their offspring to stay find not only small vehicles but, for babies, seven bibs, one named for each day of the week, with pink piping for girls and grey for boys, and there are matching mini-robes that are so cuddly I immediately wanted to become a Lilliputian and try one on. This hotel has so many pluses, like a lobby that extends into the all-day meeting place for locals that is the lobby lounge, a long space that ends in a giant bookcase which opens up into a bar. 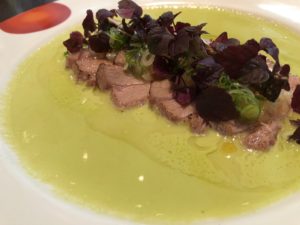 Sylvain Greiner pulled the Sipsmith Raffles bottle off the gin shelf. This gin, here branded for the hotel, is now owned by Beam Suntory, who bought Sipsmith for £50 million in 2016. This has made millionaires for the two young friends, friends Fairfax Hall and Sam Stamford Galsworthy, who, with finance from Rupert Hambro, started Sipsmith – Galsworthy, by the way, is, as his name suggests, a descendent of Sir Stamford Raffles. Sylvain Greiner, who is in charge of restaurants and bars here, has several successes on his hands. One is Nobu Matsuhisa’s 96-seat Matsuhisa, which flows out to the garden in summer and year-round, when necessary, to the neighbouring lobby lounge. Locals love this restaurant. Last Saturday night, apparently, they did a total 308 covers, an all-time record. 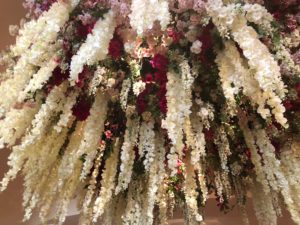 Leave under a six foot-wide chandelier of flowers

Our lunch was gorgeous, with lots of sharing platters, including Nobu-san’s version of both salmon and tuna carpaccio, and miso black cod, and, for Aaron Kaupp, mixed seafood (as above) and, for me, a mega-plate of sashimi. We talked luxury, which is a recurring theme these days, and how essential it is to understand that luxury is not just about money. It needs personality. And with that I skirted out, under the mega flower arrangement hanging, as a chandelier, just outside the Matsuhisa entrance, holding my breath and hoping that the water test-tubes up there among the floribunda, all the better to feed’em, would not leak on me as I left this luxury hotel’s understandably-popular Asian-for-today restaurant.