A new hotel as part of Bürgenstock resort, being redeveloped high above Lake Lucerne

Up on the top of Bürgenstock, nearly a thousand feet above Lake Lucerne, an iconic luxury resort is, like a sleeping giant, getting ready to awake (but you have to wait until 2016 for it to show its new face properly).

One of the 148-acre mountaintop beauties will be a five-star hotel, working name Icon, where all 110 rooms will face down the steep grassed slope to the lake.

This hotel will be connected, at ground and under-ground levels, to massive meeting facilities, good shopping, and a three-star hotel, the restored Bürgenstock Palace. The gal had a look round. 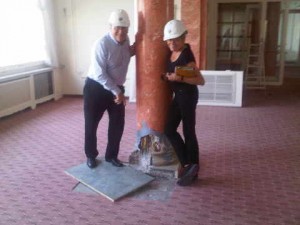 At the moment the Palace is being gutted.  Its 1906-vintage façade will be retained, as must be interior columns that support the whole five-floor structure.

Bruno Schöpfer, the boss of the whole resort, showed how the columns look like salmon-coloured marble, but chip away and you find it is painted plaster wrapped around wires and, in the centre, the concrete support for the ceiling above.

His team is, by the way, storing anything that can be re-used.  I saw a room full of carefully-sorted old knives, forks and spoons, and silver serving dishes.

All will be used in one of the new restaurants, which sounds like a kitchen concept bringing back traditional fine-dining ambience and dishes (will it be a little like the retro-food, 21st-century design of DINNER by Heston Blumenthal in Mandarin Oriental London?). 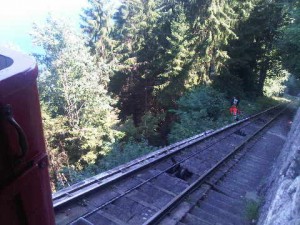 Looking down from the top of the ultra-steep funicular ....

Which other luxury resort not only has a century-old vertical lift but also a pulley funicular to move people up and down between the resort and its own dock and boathouse, 1,000 feet below at the lake?

As one 20-person car starts from below, the other, attached to it by a long cable and pulley, starts going down from the top.  It is incredibly steep, and the journey one way takes about seven minutes. 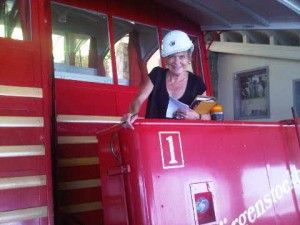 The two red cars are original, 1888. They are being restored and will be used to bring day tourists by the dozen.

Arrive at the dock, by 20-minute boat from Lucerne – where you have bought your De Grisogono and Rolex and a couple of Patek Philippes as gifts – and head up for the view, and lots of photographs, atop Bürgenstock.

Few will realise that 100 yards from the boathouse is a CHF 40million hydro-electric power station, new, which sucks water from 38 yards below the lake’s surface to provide much of the massive resort’s needs. 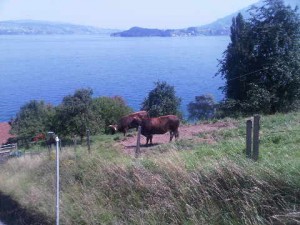 At the bottom of the funicular, cattle graze peacefully

It is actually very peaceful down there. Cattle graze.  A few little chalets and big covered sheds, for cattle in winter, are the only signs that this is a working community.

Farmers make cheese which in the past was carried up to the top of the mountain in a wood back-pack rather like a bookshelf.

The actual weight of that alone would make it difficult to move, let alone have to carry it, filled with heavy cheeses, all the way up the mountain. This cheese-carrier is one of the many thousands of treasures salvaged from ‘the old’ and awaiting a place in ‘the new’. 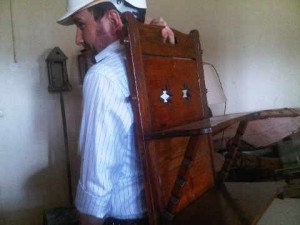 There are whole rooms currently used for storing old chandeliers, old tables, old anything (you had better not feel old when visiting this place or you might be shut up too, among other vintage pieces…).  But it is all so exciting and the air so invigorating you feel better just for being here.

They are spending more-than-oodles on such environmentally friendly things as digging out a whole about the size of six squash courts and taking that rock, and pulverising it to dust, to use for all the cement that will be needed, with some of it already deployed in building a new road so that traffic at ground level goes nowhere near the new five-star hotel, and the renewed three-star Palace (which will also have 110 bedrooms), and villas and 58 long-let super-luxury residence suites. 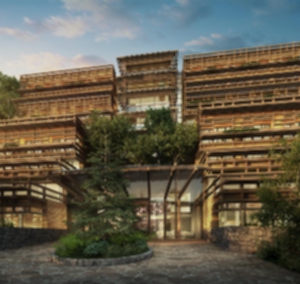 Bürgenstock will have a serious medical spa....

The aforementioned hole-in-the-ground will hold what will become another super-luxury offering, a serious 160-room medical spa. Architect Matteo Thun won the design competition for this (all 24 Bürgenstock projects have run architectural competitions, which resulted in detailed presentation books and exact-scale maquettes).

Do not come to the medical spa for pampering.  This is for restoration.  Think who might come and the fact that an Arabic restaurant will be one of the ten-total eating and drinking venues gives a clue. 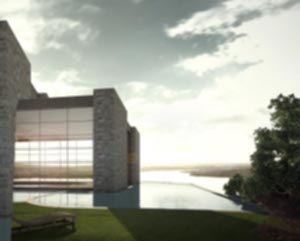 .. and the - separate - pampering spa will have two pools, one indoor-out, cantilevered high over the mountainside

Pampering is part of it all too, of course.  There is an existing kidney-shaped outdoor pool where Audrey Hepburn (who married Mel Ferrer in Burgenstock’s chapel in 1954) and other names of the past frolicked and this cannot be touched, to preserve heritage.

It will be cleaned and glorified with lovely gardens around. The big adjacent wellness building, however, will also have another pool, wrapped around the outside of the building to give not only one of the most sensational infinity pools anywhere, a world-beater when it comes to the drop below the infinity edge, down the steep thousand-foot slope all the way to the lake…