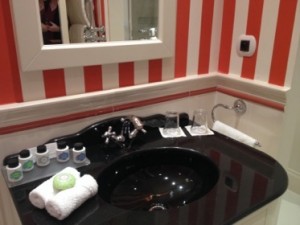 But, as the gal has already said, Nice’s premier luxury hotel, the Negresco, is not only ancient but MODERN. Bathrooms are being re-done throughout the entire 120-room hotel. The gold-look bathtubs and basins are going the way of the fake-fur coverlets and plastic-look chandeliers that anyone who visited 20 years ago will remember. Travel tip, 2015 is the time for all those past visitors to return, to see what GM Pierre Bord and his team are doing to upgrade the hotel. Yes, expect Michelin food, but now also an outdoor terrace, ideal for promenade-watching summer-long, and there is the fun of the bar and, now, a dedicated gym with good equipment. 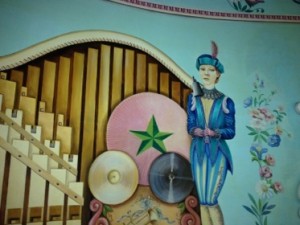 But you still have the hundreds of art works to admire. This is one of the wall adornments on the way to the all-day Rotonde restaurant, where fortunately servers no longer wear mythical circus outfits and, although there are still lifesize circus horses they no longer rise and fall above the cornflakes. Yes, you still sit in buttercup-edged rose-pink velvet booths but apparently they are on the way out. Yes, says Pierre Bord, Negresco is definitely looking ahead, while retaining its unique heritage, and locals are using the hotel more and more (much to my amazement a local financial group hosted a breakfast meeting during my stay and it started at seven, at SEVEN, in France!).

.. and in the hall (Niki de Saint-Phalle)

I see so many old friends every time I Negresco – this place deserves its own verb. I have to go and see the rotating yellow sculpture, La Nana Jaune, 1995, by Niki de Saint-Phalle, the wife of Switzerland’s singularly-recognisable sculptor Jean Tinguely: they combined to design and produce one of the extraordinary sculptures in the gardens just outside the entry to the beautiful spa at Zurich’s Dolder Grand. La Nana Jaune twirls slowly, and she has pride of place at the rear of the Negresco’s heritage oval lobby, attributed to Charles Garnier, he of Paris’ Opera House and Monte-Carlo’s casino. Near to La Nana Jaune is a wall fresco with some naked nymphs lolling around. Negresco’s is an eclectic art collection. 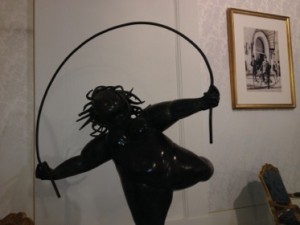 For the first time, I see that perhaps La Nana Jaune has a possible rival in this luxury hotel’s collection, this figure by Mateo Mornar, the Croatian-born sculptor who has a school here in Nice. Commendably, a percentage of all income from his works goes to the Prince Albert II de Monaco Foundation – HSH Prince Albert is a good friend and Mateo Mornar did a small sculpture of the bride and groom to decorate the wedding cake of HSH and Charlene Wittstock. That was three years ago and perhaps Mateo Mornar is now hard at work doing two baby sculptures, one of the son and heir of the Grimaldi dynasty, Jacques, and the other of his twin, Gabrielle.