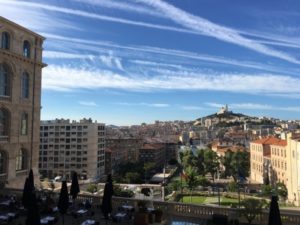 Looking up to Notre-Dame from room 333

InterContinental Marseille – Hotel Dieu is one of the most magnificent luxury hotels not only in France but in the whole of Europe (if not the entire world). It sits, says the gal, in a commanding position on Panier Hill looking across the city’s Vieux-Port and up to Notre-Dame de la Garde, in the St-Victor area. Panier Hill hosted buildings that gave comfort to the city’s sufferers way back to the 12th century: the building you see now was designed by Louis XV’s architect, Jacques Hardoui-Mansart de Sagonne, in 1753, and later extended to become the seven-floor, C-shaped stone masterpiece that dominates the hillside today. 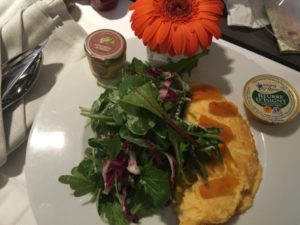 To turn it into a hotel, owners AXA brought in Anthony Bechu as architect, and Jean-Philippe Nuel for the interiors. Front-facing rooms on the third- and fifth-floors have sizeable balconies, and I sat out on the balcony of 333, watching the sun set and the colours change on Notre-Dame. I ordered typical local fare, a black-tomato gazpacho with a big dollop of mozzarella, and then, joy of joys, an omelette topped with strips of bottarga, smoked grey mullet roe. It went marvellously with a glass of D2 by Vignerons Famille Double, in St-Cannat, and with thick country bread, and four tubs of Beurre d’Isigny (I am reminded these days that Ruben Tabares, a wellness guru whom I really admire, eats butter, by itself, when he feels his body needs it). 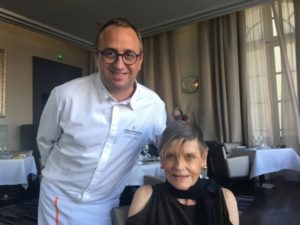 My body certainly needed, and appreciated, all the exercise I had here in Marseille. As well as the total 119 steps up from the Vieux-Port, the hotel has two glorious 18th century external staircases, one in each wide wing. There are more steps up from the ground floor to the first (English-style) floor gym, 24/7, and its adjacent indoor pool, which opens at seven, as does the spa. Up on that floor, too, is the football-sized open terrace, which is basically above reception. Apart from about four months of winter, you can sit out at any time, at the bar-lounge end, with real olive trees, or at Les Fenêtres restaurant, which flows out here. All the hotel’s food, by the way, is overseen by the absolutely charming, and talented, Lionel Levy. 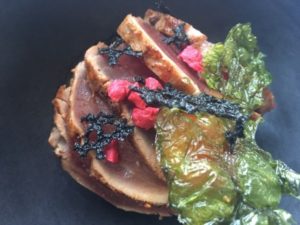 Tuna tartare, once its black seaweed lid had been removed

He was, as always, there when I dined with the GM, Madelijn Vervoord, and her husband Régis Lecendreux, at the hotel’s other restaurant, the Michelin-starred Alcyone, named for the Greek goddess who bore many of Poseidon’s children. Let me briefly describe our meal, which started with drinking pinkie-finger-sized phials of olive oil and pesto hanging from a miniature olive tree, and, starter number two, went on to egg, cream, olive and verbena in broken-shell egg cups. My meal-proper began with a black urn covered with black lace (=edible black seaweed) – underneath was red Mediterranean tuna with Manakara peppercorn vinaigrette. Main course? Just simple, home-made vegetarian ravioli over which carrot and saffron broth was poured at table. Dessert? Yes, raspberries, in a tiny tart, with an accompanying crescent shape of red bell pepper and 15 year-old Balsamic. No wonder Asian guests at the next table were taking so many photographs. Last time I was at this luxury hotel I tried Lionel Levy’s brilliant deconstructed bouillabaise: this visit he excelled, once more. NOW SEE A VIDEO ON THE HOTEL