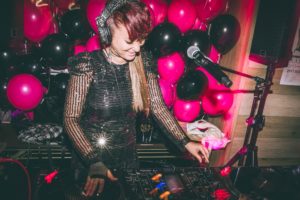 Marriott pulled out all the stops to launch its 205-room Moxy Tokyo Kinshicho hotel on February 5th, 2018.  Celebrating Tokyo’s kawaii cutness, the 350 guests, hosted by GM Hisashi Oinuma and representatives of the owners, Pacifica Capital KK, included national television personality Maggy, above with one of the DJs, and a variety of other big names.  As Toni Stoeckl, Global Brand Leader and Vice President, Marriott International’s Distinctive Select Brands, said, the idea was to celebrate Japan’s outstanding and unique culture with local artists from music, art and fashion to create an unforgettable event.

Guests were buoyed with such original craft cocktails as “Harajuku Punch”, “Rebel, Rebel”, “Cosplay-mopolitan” and “Street Fighter Highball”. Those turning the vibes included DJ Yuka Mizuhara and DJ Alissa Ueno and DJ Alissa Ueno, creative director for clothing brand “FIG&VIPER”. One floor of the hotel was all about celebrating the gaming culture of Japan. Through décor and graphics, Moxy staged a perfectly Instagrammable scene inspired by nineties gaming culture, making the virtual worlds created by gaming a reality for one night. By bringing in authentic arcade games including Pac Man, Super Mario Land and Space Invaders, attendees were able to truly get into the gamer’s spirit.

The most eccentric floor in the Moxy Playhouse, however, celebrated Tokyo’s colorful “cosplay” (costume play) culture. Inspired by Japanese fashion icons Gyarus, Lolita, and Decora.  Attendees were invited to “play” whoever they wanted to be along with rebel and cosplay participants. So, will Marriott ever be thought of as traditional, from now on?