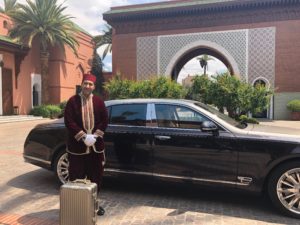 Royal Mansour Marrakech is for travellers who want to combine the feeling of staying in a riad, or ryad – housing in close confinement that partly overcomes lack of ground-space by building vertically – with true luxury. Try a genuine riad in Marrakech’s Medina old quarter and it will probably be extremely noisy and perhaps dark and claustrophobic.  Royal Mansour, opened in July 2010 at the command of The King as part of his 2010 vision to improve tourism, burst on to the scene to show that true 21st century luxury need not neglect tradition. The gal arrived in the hotel’s Rolls-Royce, but the doorman was in traditional gear. 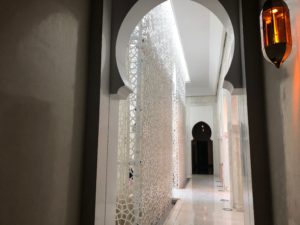 Narrow pedestrian-only streets are a feature of the Medina, and here the designers, 3bis, have included narrow walkways in the spa (an amazing structure which, at ground level, has a two floors-high inner shell of white metal fretwork like a giant gazebo, and the functional areas of the spa, and the gym, are relegated below-ground).  Even the walkways between buildings are only about three feet wide, and they deliberately twist and turn, to avoid long sight lines.  The buildings, terracotta-coloured, have heavy pale turquoise doors, and barely any windows. They have two high storeys, and rise about two metres above the rooftop to provide absolute rooftop privacy. 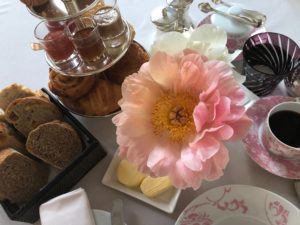 All the 53 suites are therefore vertical. Typically, #43, 175 sq m total interior, had a small outdoor courtyard, its floor and some walls finely tiled. The ground floor had a compact living room and kitchenette corner. Rise 33 interior stone stairs to the bedroom and bathroom, and a further 26 steps to the rooftop. Small windows have decorative door-type shutters. Unseen interior service ways allow employees to use elevators to access any floor, and underground corridors mean buggies can be used back-of- (or under-) house. Those who need a lot of light at breakfast would probably ask for their meal to be delivered, room service, to the rooftop terrace. Alternatively do as I did, and head for the gorgeous outdoor terrace of the all-day La Table restaurant, overseen, as from the start, by Yannick Alleno. 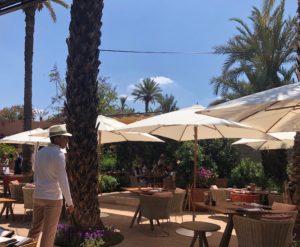 MD Jean-Claude Messant, who had a long career with the Hôtel Barrière group, is just made for this hotel.  I see his eye everywhere (in such details as the gold-embossed personalised stationery, in a woven leather folder in my riad, and the vertical-yoga slings that hang in a fragrant garden area outside the spa). Two years ago he added another couple of acres of garden, which gave the property a massive outdoor pool to complement the spa’s interior pool. This extra landscaping, designed as the original by landscaper Luis Vallejo, has also added the highly popular Le Jardin casual restaurant. It was fortunate that a lunch reservation had been made as by 12.15 the place was full, with fashionistas of the world not exactly in tears but certainly pleading to get in. How many luxury hotels have that problem on a daily basis? NOW SEE RIAD 43, AND A CENTRAL COURTYARD VIDEO