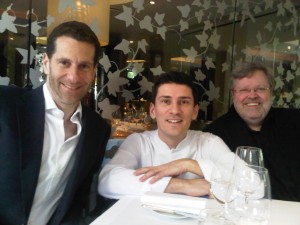 At The Greenhouse, London, from left, Marlon Abela, Arnaud Bignon and Patrick Willis

When the right kind of invitation comes in, it is well worth making a detour via London, says the gal.

That invitation came in the form of lunch with Marlon Abela, the enigmatic aficionado of the quality side of life who is revolutionising fine dining on both sides of the Atlantic.

His name has come up so many times, especially from long-time friend Patrick Willis, who is another contender, like MA, for the garland ‘Mr Haute Cuisine’.

Every time one hears from Patrick he has been sampling first Bordeaux growths in yet another dusty cellar or nibbling on 20 different truffle courses in yet another distant orchard or something.

Anyway, Marlon Abela came from a food family and, he says with quiet deliberation, that it was a natural to choose his current way of life.  He was born with a silver spoon, in culinary terms.

Father Albert Abela was a legend for catering throughout the Middle East.  As a kid, he loved the first figs of the season, and he was well-used to three-hour meals.

He loves the best when it comes to food, and he is such an inveterate wine lover that he writes a tasting column in the bimonthly Spear’s Wealth Management, Business and Culture Magazine.

He told me how he came to start MARC, the Marlon Abela Restaurant Company.  In 2003, before he was 30, he opened his first restaurant, The Greenhouse, in London (it immediately got a Michelin star, which it has retained).

He now has four restaurants, including a private club, in London and the same number in the USA (in New York, Connecticut and Boston). He also owns and runs MARC Fine Wines.

Ten years ago, he dares to say, both London and New York lacked the fine dining quality he craved.  London could do with a contemporary European fine dining, he felt, and a Japanese restaurant and a dining club.  New York sorely needed a high-quality Italian.

From the start he was determined each restaurant would be unique, with different names, looks and food styles.  He has worked with designers as diverse as Tara Bernerd (who has also done Belgraves Hotel, London), Tony Chi (whose hotels include Park Hyatt Shanghai), Virgile & Stone (who have worked quite a bit with conceptor Roland Gaelens, as at The Oberoi Mumbai) and the Rockwell Group (yes, the guys who did the restaurant at another luxury hotel, Mandarin Oriental Paris and also the whole of the interiors at W Paris-Opéra). 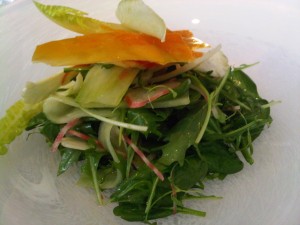 But wherever you go for a MARC experience, you find passion and quality, of design, food and wine, and service.  In London, the ever- calm Greenhouse shows how the MARC concept is chameleon-like to its surroundings.

In Hay’s Mews, Mayfair, it is entered via a small garden with topiary and simplistic stone sculptures by Emily Young.  Many of the 60 seats look out through picture windows to the greenery: others see a leaf-embossed glass wall. Here, unlike his New York restaurants, there are crisp white linens, and silvermarked salt and pepper mills.

Salted butters are distinguished by a few salt grains on that particular butter round’s slate holder. Waiters, of both sexes, glide like winners of Dancing On Ice or the corps de ballet at the Bolshoi. Among regulars quietly flitting in to their regular tables is Sir Stuart Rose, penultimate boss of Marks & Spencer, whom I last saw at his regular breakfast venue, Claridge’s. 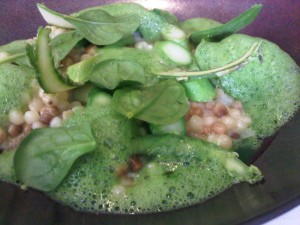 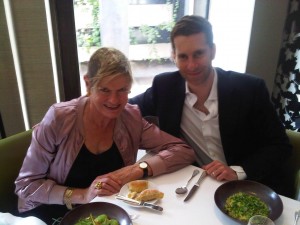 During our comparatively humble lunch – a salad and a pearl barley mélange, both exquisite – he talks non-stop.  FPB, he says, is his highly successful partnership with patissier François Payard in the USA, and this will see two more openings this year.

He does not rule out at least one MARC farm and a vineyard, to supply the superlative quality foods and wines that are an essence of the brand.

He might possibly do a MARC owned-and-managed hotel, but it must be exactly the right product – he is more likely to run a freestanding restaurant within an existing hotel, something that has been proposed many times but so far he has not been offered a space with outside entrance that allows him total control.

MARC is successful, he says, because he, with the support of Patrick Willis and the rest of the team, are in full control – and each restaurant is local.   And with that, the gal just manages to get a word in edgeways and say a big thank you, for the experience and his team, and once again she rushes.