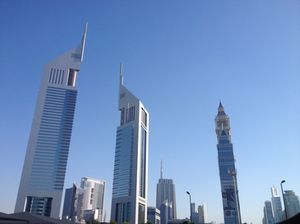 Sometimes the established is the best. The pair of 350-metre-high glass buildings, in triangular layout, are known as Jumeirah Emirates Towers. Because of their proximity to the royal palace of HM Sheikh Mohammed, the 12 acres around are beautiful gardens, and will never be built on. The complex was completed 1999 and as you would expect it is established, but what is a surprise is that it is always up to date, and sometimes beyond. This is the luxury hotel that has made its gym into a destination. Go to work out and you saunter through a working coffee lounge and help-yourself-newspapers, with different types of seating, on the way. Brilliant, says the gal. 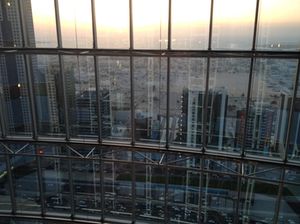 The hotel, in one of the towers, is like a kaleidoscope. The light reflected on the exterior changes with the sun. The view as you soar up in one of the glass-sided elevators, up through one ten-floor open atrium to another, that goes to the 41st floor, also changes as the sides of floor corridors gradually evolve, from painted grades of sand colours beneath to grades of sky colours as you arise. Inspired. Whoever Hazel Wong, the architect who designed all this way back at the end of the last century, is, I say well done. The lobby, by the way, is THE meeting place, not only for guests of the 400-room hotel and those who work in the adjacent office tower, but locals who want to be at the centre of what is going on. 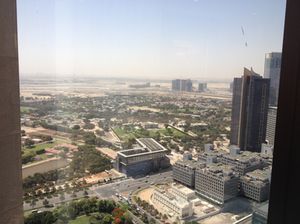 View down to the royal palace

One side of the hotel block’s triangle is all glass, bottom to top. The other two sides are rooms. I am back in 4001, in the point of the triangle, on the Chopard floor, themed by Caroline Gruosi-Scheufele, the jewellery company’s Co-President (who has just bought Hôtel le Vendôme, Paris). You access these rooms by a glass door into the corridor, and you pass Chopard vitrines as you walk to your room. No, you do not get a Chopard necklace as welcome, but the soaps and stuff are Chopard, in various shades of purple for easy identification. From 4001, I look directly down to the royal palace and, to its left, Sheikh Mohammed’s stables and a track. He often uses this hotel – its Rib Room is a favourite, and his named steak knife is in a display cabinet with only about 29 others (yes, you guessed, now one of the other named knives is mine…). 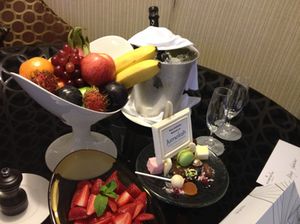 But what a welcome I did get, flowers and fruit from the hotel, and a bottle from a friend. I asked a guest services lady as I passed her, later, in the lobby, to ask someone to pick the bottle up and take it up to Alta Badia, up on the 50th floor of the hotel. That is what happened (in so many other parts of the world the bottle might never arrive, but here you can send a suitcase from one hotel to another and it is not opened or lost enroute). This is actually an ideal welcome, but then this hotel knows what its regulars – 66 percent of all guests – like, even those who only come through once a year. I also had a herbal sleep pillow, with a card from the head housekeeper. 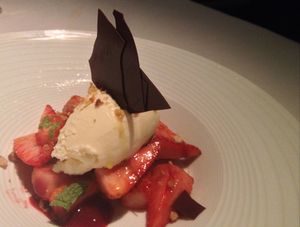 So, Alta Badia, a new restaurant run as his own operation by an absolutely charming Sardinian, Claudio Melis. This is a stylish place, with great food. Expect to say wow, and wow again. A card on the table, signed by him, said ‘honest Italian cuisine, my recipe for happiness is simple, one bite at a time’. Empty glass cups were part of our place settings. Before the meal started, we were poured consommé of the day, or night. Today’s was flavoured with parmesan and rosemary, oh wow. After one course and then another, with discreet pouring of the Champagne, we were brought a signature dessert, his white asparagus ice cream, with fresh strawberries. The W-word, again. Back down on the 40th floor, I used my Mont Blanc-themed room key (stylish!) to open the glass door to get to the Chopard rooms. 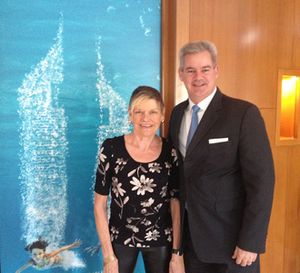 I missed a surprise party yesterday. The boss of the luxury hotel, Grant Ruddiman, had his birthday and some of his team decorated the staff restaurant with balloons, enticed him in, and he found his wife and daughter and over 250 of his 800-strong complement there. The effect must have made Victoria Beckham’s highly-publicised birthday, albeit at Amangiri, seem merely like a Hello! moment. But I had a surprise today. At breakfast with Mr R, I find a waiter bringing me the exact items I would have taken from the buffet (this has only ever happened once before, on the Zahra Nile river cruiser). See why so many regulars, like the Sydneysider just about to make his 284th visit, come back to this hotel, again and again?