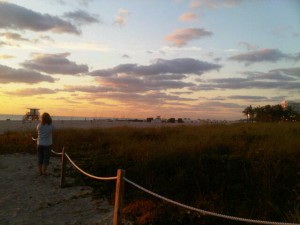 There is something about Miami’s South Beach – when the weather is perfect, that is.  Wake up at The Raleigh, on Collins and 18th, and if it is right now, mid-January, the weather is cold enough for locals to put on fleeces and for tourists to wear practically nothing.

But then anything goes.  Some weather full evening dresses as the sun comes up.

From any luxury hotel, head as early as you can to the Beach Walk.  It meanders for miles, and hosts cyclists, runners, joggers, walkers and those being walked.

The latest craze is skateboards pushed  by long sticks, just like punts, on the River Cam at Cambridge or the Thames at Oxford. University life at Oxbridge can be typified by long punts on lazy afternoons, finishing at a pub for a pint of refreshment.

But here WE are on South Beach.  Head east to the sand, to watch the sun come up.  And then take exercise. The beach walk is meticulously clean, swept by people in dayglo orange shirts and patrolled by keen athletic policepeople on bicycles.

Legs and more on the beach walk

We had our own bicycles again, the same impossible-to-manage city bikes from The Raleigh.  Most tourists rent Deco Bikes, like the rent-a- bikes started in Paris and now seen in every top city in the west, it seems.

We took our Raleigh bikes out along the beach walk.  This now runs north-south through 77 blocks, from North Beaches open park to South Pointe.  The whole thing, when finished three years ago at a total cost of six million dollars, includes the North Beach area, the mid-island boardwalk and the winding ocean walk in South Beach.

A large contribution to its completion came from local developer Eric Sheppard, of WSG, owner of Canyon Ranch Hotel & Spa at Collins and 68th Street.

Anything goes - an evening dress at 0900

“This is the whole lifeblood of the entire Miami Beach. I call it the Miami Beach connection… this enables us to connect all of Miami Beach through this boardwalk. We’ve invested the money. We hope people invest their time and their brain knowledge to really capitalize and embrace and utilize the health and fitness and utilize this beautiful boardwalk because it’s going to change their life,” he says.

As Ashton Coleman says in www.miamibeachrealestateblog.us, Miami Beach is called the cleanest city in the USA. It has the ultimate in living the healthy lifestyle so greatly missed by the majority of Americans. On a regular basis, you find fitness freaks rollerblading or skateboarding, plus bikers, walkers, runners and the in-between. 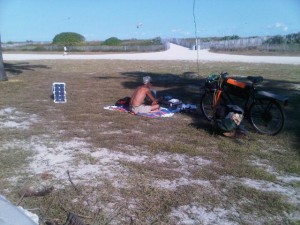 We came across a prune-like sage sitting by the beach walk, tapping out morse code into a receiver powered by a portable solar panel.  His area was attached to a string strung between to seagrape trees.  His bicycle, laden with other props, was parked near him, ready to take him on to the next venue.

Come to Miami Beach for everything in real, and unreal, life.