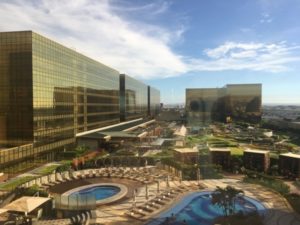 Another innovation in Manila is the introduction of integrated resorts, led by City Of Dreams, a joint venture between the Philippines’ richest man, retail magnate Henry Sy, and Melco Philippines, which is Macau’s Lawrence Ho working with Australia’s James Packer who, says the gal, seems to have split with his fiancée Mariah Carey. City Of Dreams consists of 15 acres holding six impressive gold-mirrored towers, designed by Michael Fiebrich – the towers are incredible at sunset. The three luxury resorts in the towers, Crown Towers Manila, Nobu Hotel Manila and Hyatt City of Dreams Manila, share the massive casino, and 28 restaurants, plus kids’ playcenter DreamPlay, the first-ever official DreamWorks-inspired retail, spa and wellness. 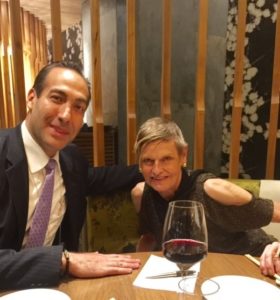 I was thrilled to be staying in the ‘posh hotel’ of the trio, Crown Towers Manila. Suite 5129 had great views overlooking the big garden, which looks communal but when you get into it you discover, as if in a maze, there are some areas you cannot get into, or out of – the garden is on top of the casino. It was all very stylish, with Antica Farmacista toiletries (next to a fresh orchid, a lovely touch in a bathroom), and a chunky silver pen to go with satin-smooth notepaper held in a leather clip. A female butler seemed always to be waiting outside my door when needed – perhaps she was there 24/7, like the gym. 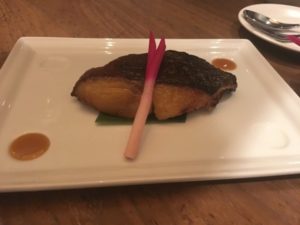 She escorted me through to Nobu, the restaurant inside Nobu, the hotel, where our jovial table was made up of Charisse Chuidian, surely one of the world’s most experienced PR directors, and Marlon Hirsh, who is GM of both the Crown and Nobu hotels (he must be unique when it comes to hotel bosses as he started his career as a private investigator). Seated with us for a time, too, was exuberant-as-ever Irishman Jarlath Lynch, who seems to run food and operations for the entire complex. Of course I had Nobu’s black cod, to go with Matsuhisa Private Selection Cabernet Sauvignon, and we all tried various sashimi, and some sushi, and tempura, and samples from the special Kobe beef promotion at the moment. 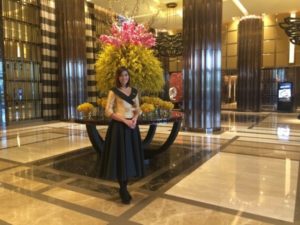 An Audrey Hepburn-like ambassador in the gleaming lobby

We walked back through the Crown lobby, a really imposing space, with columns rising to a soaring ceiling. Design et al magazine, indeed, awarded this lobby best in the world at the International Hotel and Property Awards held at Belmond Hotel Cipriani, Venice, this September – and the entire hotel was honoured in best hotel over 200 rooms category. I would like to think that the lady ambassadors gracing the lobby are also honoured. Of course it helps that they seem to have appointed only local Filipinas who are six feet tall with waists that are so tiny you can put both hands around them. I think their outfits, with black Audrey Hepburn-type skirts, are just superb, and they make this luxury hotel seem even more opulent. NOW SEE THE VIEW OUT OF MY WINDOW, BELOW