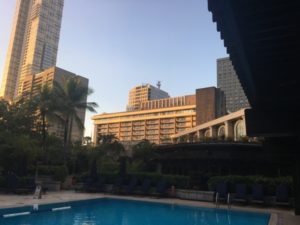 Looking up at the hotel, from the gym

Jeepneys are a symbol of the Philippines, but no-one has one as elegant as the example above, specially made for the country’s most iconic luxury hotel, The Peninsula Manila. This jeepney seats eight, has air-conditioning, onboard WiFi and a refrigerated drinks cooler, and of course it is in the company’s signature Brewster Green (originally, Jeepneys were converted from jeeps left over by US military after WWII). This luxury hotel, by the way, has quite a history. It was built 1976 for a massive IMF conference, and it has always been at the forefront of working with the community, says the gal. After Typhoon Haiyan in 2013, this hotel and other Peninsulas raised $912,000 through HOPE for the PHILIPPINES, by donations from room rates plus selling halo halo desserts, and ornaments. 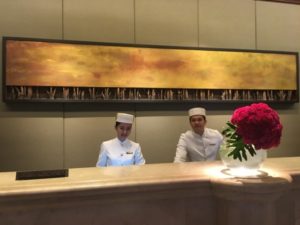 Now, The Peninsula GK Village in Maribi, Tanauan, Leyte, houses 75 families as a result. Back at the 493-room hotel, other activities continue. There are four Chen Man pink paintings, similar to those I had seen at The Peninsula Hong Kong – these will be auctioned to benefit the Philippine Foundation for Breast Care, Inc. And just as the hotel, led by GM Mark Choon and Resident Manager Yves Thoma, reaches out to the community, so movers and shakers from outside use the hotel regularly and, in some cases, as a daily routine (one table-for-one, with a copy of the International New York Times next to a silver Reserved sign, awaits an important person for his, or perhaps but not probably, her, breakfast in the main lobby). 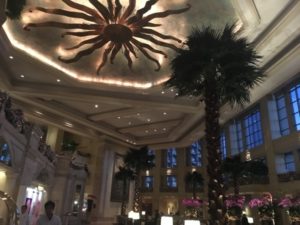 Looking up in the lobby

Oh the lobby, it is gorgeous. Its eight lifesize palm trees are topped by mummified green leaves farmed in Spain (they last about three years). The ceiling is embellished with sculptor Napoleon Abueva’s 21m-diameter brass, copper and steel sunburst, weighing 600kg. Every evening musicians play in the upper gallery. The service is impeccable, everywhere – at least nine of the 650 staff have been here since the hotel’s opening. They were honoured at a 40th birthday party, hosted by Peninsula Chairman Sir Michael Kadoorie, on September 14th, 2016 (the exact anniversary of the opening); one of the veterans, a doorman, actually retired that very night. With only 9% staff turnover, it is possible to run such an operation as a well-rehearsed Bolshoi. 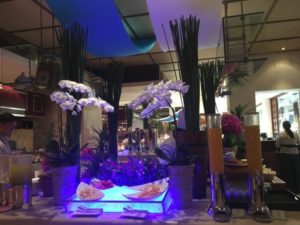 One of many areas of the breakfast buffet

We had dinner in Spices, the pan-Asian restaurant, surrounded by local families. I had  breakfast in the all-day Escolta, and honestly, probably 90% of tables in the full restaurant, a massive space that must seat about 250, seemed to be outsiders. People in the Philippines do seem to use hotel restaurants, which they consider part of their community. And obviously a luxury hotel that can offer superb service, as this does, wins. NOW SEE MY VIDEO OF SUITE 1106 BELOW