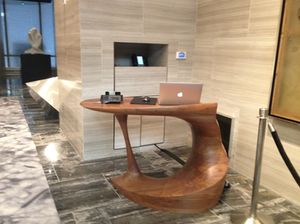 Through the front door, this is the desk you see

What is it like checking into a high-profile luxury hotel on its first day of operation? The gal planned deliberately to be in the Big Apple on Tuesday August 19th, 2014, to be there at the launch of the long-awaited Park Hyatt New York. Its entrance is discreet, a couple of blocks west of MoMA and its giant red sign on the pavement sidewalk. By contrast 153 West 57th Street merely has a copper plague one side of a pair of wrought-iron and glass doors. But go in and you are in a lower lobby of sparkling cream ice-coloured marble and carpet, with this amazing wood desk that looks as if, like Topsy, it just grew. 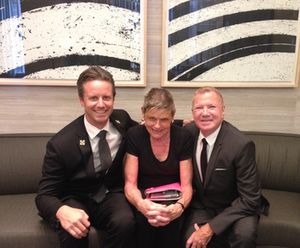 Several ultra-chic black-suited personnel, the women in Narciso Rodriguez, the guys clothed by Barneys, stood smiling and then Simon Rose appeared. HERE he is, the concierge who was enticed from Sydney to London and then disappeared, drawn by love (later I meet up with him, and with his fabulous boss, GM Walter Brindell, who when offered this job, taking him away from Chicago, said YES without drawing breath). We are sitting in an elegant hotel-guest lounge, opposite front desk. To one side is a ceiling high open stainless grill, its shapes indicating New York skyscrapers. 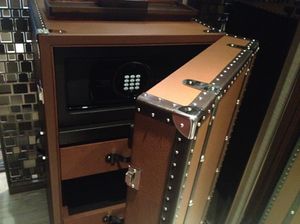 The whole intent, says Glenn Pushelberg – one half of dynamic designers Yabu Pushelberg – is to emulate an Upper East Side Manhattan apartment, for a couple. The hero and heroine of this story are obviously well travelled. Go into any one of the 170 rooms and you see a standing Louis Vuitton-type trunk. Open it up and the top quarter holds the safe, with storage drawers below. The minibar is in a standing cabinet with chain-patterned brown lacquer exterior, as if possibly brought home from our mythical travellers’ trip to China. 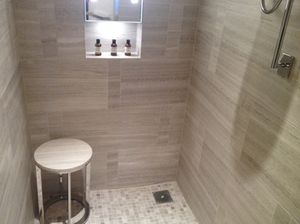 The room is more ice-colour, including the stone floor (there’s a complementary rug under the bed) and throughout the bathroom. I love the shower here. There is a little matching stool, and the toiletries sit on a shelf below a shaving mirror, with parallel vertical lights. I wonder how many times everything was tested – does the water run hot, instantly? Yes. Are there enough towels? Yes. The dry runs for any luxury hotel’s opening are like rehearsals for a play, but in the theatre, when it comes to the real performance, you can improvise. In a hotel, you cannot substitute, and I do not trust critics…