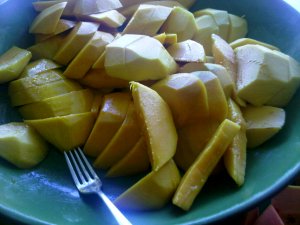 Mangoes for breakfast at the Copa

As expected, the mango dish at the ‘Copa Palace’ breakfast was like an offering of big, orange jewels – and the other fruit was just as good. On my way back into the hotel I passed by Marilyn Monroe, or rather a photo of her, in one of the H. Stern vitrines in the hotel.

Ah H. Stern, I remember it well. My first visit to Rio I was, like every hotel guest, given an invitation to visit the H. Stern store, for a complimentary gift. It turned out to be a cocktail shaker.

This visit, I went to the big H. Stern store at the Copacabana Palace Hotel. I was limo-ed to head office, to meet up with Ronaldo Stern (see below). He and his brother Roberto now head the global jewellery empire started in 1945 by Hans Stern, then recently arrived from Germany. 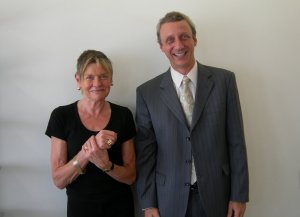 Ronaldo Stern and me

Apparently Hans Stern was amazed by the beauty of Brazil’s precious stones and made them his life mission and today H. Stern headquarters displays all stones native to this lovely country, aquamarines, emeralds, tourmalines and imperial topazes – the last is exclusive to Brazil, and it is found in only one mine. The H. Stern gallery includes a breathtaking display of 1,007 tourmalines, which come in a variety of colours, mostly greens.

I have long been fascinated by the Israeli-Russian diamond king, Lev Leviev, who uniquely controls all stages of diamonds, from mining through to having eponymous diamond stores. H. Stern is the same when it comes to precious stones from Brazil.

Ronaldo says it has access to mines, its craftspeople cut and polish, it uses inhouse designers and manufacturers, and, in Brazil, where it has 165 stores, it controls the selling process. Every year, over 100,000 visitors to Rio are taken on tours of headquarters. I was lucky enough to be taken round by Ronaldo, but others have an audio tour, available in 20 languages, showing how a gem finds its way into a beautiful piece of jewellery.

The tour took me past glass-walled lapidary workshops where highly-skilled workers are actually cutting, polishing and finishing stones. I saw the gemmological laboratory where stones are classified, the design department responsible for drawing and quality finishing control, and goldsmith workshops which use 18-carat golds, including noble gold, halfway between white and yellow gold. At the end of all this there was a near-medical consultation, one-to-one with a specialist who can produce whatever most people want. Sadly, in my case I already had my long-sought-for ring, which I had found from my never-fail provider Regina Wong in the basement arcade under the Sheraton Hong Kong. 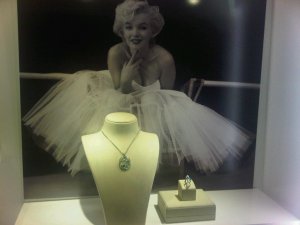 Marilyn and the jewels

For the hotel-restaurant Fasano family. back in Brazil, H. Stern has designed the Fasano Night Watch, a man’s wristwatch with, instead of digits one through 12, has one to six, and 19 to 00 (for midnight). And the company is very close, too, to such fashion icons as Diane von Furstenberg.

I felt like a bit of an icon myself as I was driven back to Copa Palace, my home for an amazing three days. As I passed the vitrine again, Marilyn was smiling.