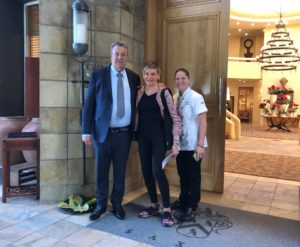 Johannesburg’s Saxon Hotel, Villas and Spa has a unique story. This is where Mandela stayed when he was released from prison in 1990 (in those days this was the family home of his friend Douw Steyn, who turned it into a hotel in 2000 – it now has 53 suites). South Africans have a natural affinity for it, says the gal, and, at their first visit, foreigners are attracted because they are intrigued.  After that, they are drawn back by six hectares of gorgeous grounds – see one of the lakes, above, and by the food and service. GM George Cohen, who has been here since 2005, has a magnificent team of 330 who only seem to leave if they need to move away from Johannesburg. 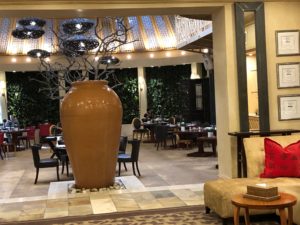 WI had met chef Jane-Thérèse Mulry when she was cooking at Qualia, in Australia’s Whitsundays.  Here, she oversees two restaurants, a fine-dining Grei and a more relaxed, all-day Qunu, named for Mandela’s home village. Her modern-African menu is complemented by veggie options. I honestly was not that keen on a mushrooms and hemp pointillist-look starter but her beetroot main course was magnificent.  An enormous baked beetroot had been bisected and encased in pasty, to look like the best beef Wellington (and it went jolly well with Rijk’s Private Cellar Pinotage 2013 Tulbagh). 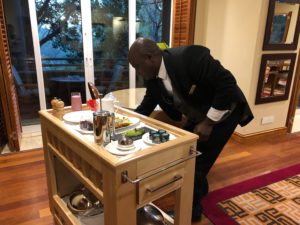 Because I had an 8 a.m. appointment at the – first-class, La Prairie and superbly-trained therapists – I went for room service breakfast. It was notable partly for delivery. Exactly on the dot of seven a senior gentleman wheeled in the most beautiful wood trolley, with a pull-out drawer holding plentiful supplies of cutlery.  Why oh why don’t all luxury hotels throw away those precarious metal trolleys, some of which look and may even be unhygienic, and use something like this, instead… I had flowers, and enough perfect papaya for a lifetime, and so much else, and coffee came in a stainless plunger.  It goes without saying of course that I also had my own coffee maker. 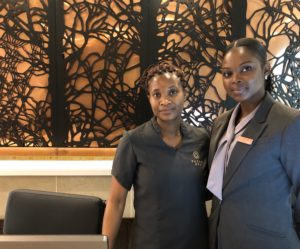 George Cohen says that for sentimental reasons, his boss Douw Steyn, who lives elsewhere these days, will never brand The Saxon. But this is a luxury hotel that will always be different, and not only for its collections, of books by and about Mandela, a whole wall of African rushwork baskets and so on. This is a luxury hotel with the highest standards, throughout. The gym, for instance, has superb and well-maintained Technogym pieces, and PowerPlate and TRX straps. Come out, to a series of pools, one heated for swimming, another alive with fat orange koi. And everywhere there are this luxury hotel’s employees: George Cohen follows a lesson from Lord Forte, for whom he worked for a long while ago: look after the staff and they will look after the guests. NOW WALK THROUGH PART OF THE HOTEL, AND SEE SUITE 200