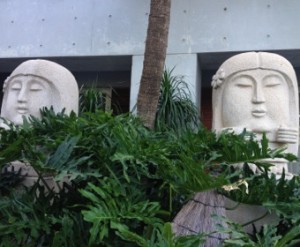 One of the many memories of the luxury Mandarin Oriental, Sanya, hotel is its sculptures, dotted around the entire 26-acre estate. This resort is unique in the entire Sanya area of Hainan in that it is not highrise – nothing is more than three floors. Dozens of individual buildings are dotted among steeply sloping wooded terrain that slides down to beautiful beaches. It is exclusive. Drive from Sanya past Dadonghai Bay naval base, along a sea-hugging main road where, in daylight hours, there are invariably several brides and grooms, in full regalia, and their professional photographers, with full paraphernalia, getting the keep-for-a-lifetime images, the sea behind. 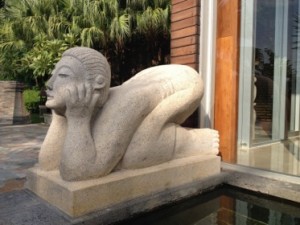 Statue outside The Cliff club lounge

The main road turns into a cul-de-sac no-way-out that takes you to the hotel’s security, and through to an oasis from the main area. Internal, buggy-width roads around the resort wind up and down (a little bit like Four Seasons in Bali Jimbaran Bay or Seychelles). Follow one arm of the many-tentacled roadways and you get to The Cliff, the all-day private club lounge for the Sky Villas, at the top of the whole complex. Outside The Cliff are more sculptures. As Bill Bensley, who designed these grounds, apparently says, they are not from any one world culture, they are an amalgam of shapes from many past dynasties. I think of the silver anthropomorphics he has put around the outside terrace pools of St Regis Bangkok…

One part of the enormous, freeform main pool

Talking of pools, the main pool complex is enormous, with more figures, and, in its freeform overall shape, some real-sand beach areas that kids love. Cleverly, these beaches are shaded, so Chinese can use them day-long without having to worry about getting sunburned. Early in the morning, just as the sun comes up, adults are power-walking, or jogging, the maze of roadways. Each seems to be formed of a different mosaic of stones – Bill Bensley has used over 50 stone types in all, for road surfaces, ceremonial towers and decorative arches. 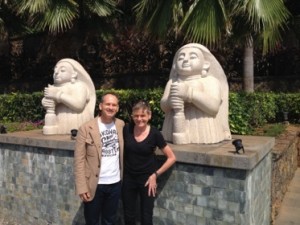 Paul Jackson, GM of this luxury resort, gets lots of exercise. Want to eat the dinner-only Fresh restaurant? If so, you can take an elevator but wellness wizards would rather take 41 rough-granite steps down from an upper lobby. He tells me how he initially followed seven generations of his family into law but he was diverted into doing something he enjoyed, which in his case meant starting work at The Connaught in London, which was evidently a grand initiation as that is where Laurence Geller first got into luxury hospitality….