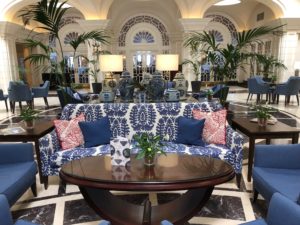 The Phoenicians dominated trade around the Mediterranean from about 1500 BC and not surprisingly there are proud Phoenicia hotels today in, say, Beirut (the venerable InterContinental) and in such other key destinations as Malta.  The Phoenicia Malta, in Floriana, next to the island’s capital, Valletta, was built as a family home for the Strickland family, and later extended.  What is now a 136-room hotel has an imposing façade, above, and the most gorgeous lobby lounge, the Palm Court.  Re-opened April 2017 after an extensive re-do, the Palm Court is a day- and evening-long meeting place for hotel guests and locals.  Interestingly, it formerly had a central bar, says the gal. 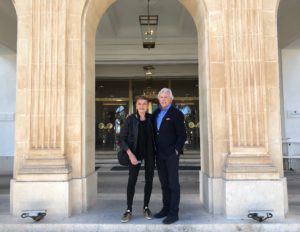 But that bar blocked the view.  Gordon Campbell Gray, who oversaw the hotel’s renovation and now handles its management, asked designer Peter Young, who was partly trained by the great Mary Fox Linton (he now has his own company) to reconceptualise The Phoenicia, and the first thing he proposed was moving the bar to one side of the Palm Court.  This allows a superb view from the main lobby through the Palm Court to the Phoenix restaurant and its terrace, and on out to the gardens.  Having the bar peripheral also allows the entire Palm Court area to be envisaged as a ‘wework’ or ‘wechat’ space, or for we-afternoon tea. 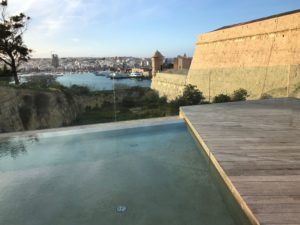 There is another bar, a charming Club Bar, with wood-shuttered windows, clubby leather seating and walls crammed with historic black and white photos.  This is a hotel with history. The first Baron Strickland, also the sixth Count della Catena, 1861-1940, was a British and Maltese politician who was variously Prime Minister of Malta, Governor of the Leeward Islands, Governor of Tasmania, Governor of Western Australia and Governor of New South Wales. After his death his widow, helped by his eight children – one of whom was The Times of Malta magnate Mabel Strickland OBE 1899-1988 – finished the building.  I wonder what they would all say to the new additions? 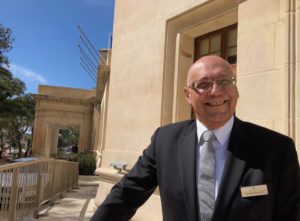 At the far end of the hotel’s 7.5-acre beautifully-tended gardens is now a futuristic fitness centre, still to be opened: this will double as changing rooms and snack bar for the glass-ended infinity pool, overlooking the Grand Harbour.  The gardens already have minigolf, and there is more exercise by simply walking out of the luxury hotel’s imposing front door and turning left to the Triton fountain, three minutes away (the fountain, designed by Victor Anastasi and Vincent App, was finished 1959).  The whole area here is now pedestrianised, and it is only another two minutes to Renzo Piano’s stunning Valletta City Gate building, finished in 2015, and on along busy Republic Street, a buzz of shops and snack bars. Coming back to The Phoenicia is indeed refreshing luxury, a much-appreciated oasis – and there is Mr Phoenicia, also known as long-standing GM Charles Azzopardi, to say welcome home. NOW SEE VIDEOS OF WALKING ALONG REPUBLIC, OF ROOM 411, AND THE BREAKFAST SPREAD