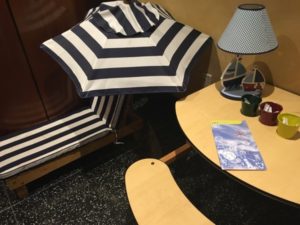 Kids’ corner in the lobby

Enrique Iglesias and Rafael Nadal will be painting the town red when TATEL restaurant opens ‘sometime’ before the end of the month (the Madrid-based restaurant is working as a partnership with the hotel, taking over the former David Bouley space in The Ritz-Carlton South Beach, but no-one there knows exactly which evening the door will open). With those two names, and the thought of the restaurant’s best-selling truffle and potato omelette, the culinary world is already salivating. This luxury hotel is, mind you, doing very nicely as it is: the gal loves its kids’ corner in the lobby, complete with educational games by the Cousteau family, crayons provided of course. 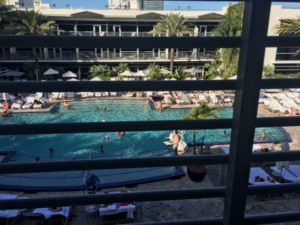 Looking down through 463’s balcony railings

The 376-room hotel is an amalgam of 1953-vintage Morris Lapidus architecture, rather like wings, blended with a modern 11-floor tower. This can make it not exactly time-saving for guests – to get to lovely room 493 from the lobby it was 26 steps to the mezzanine level, an L-shaped walk and 36 steps up to the fourth floor (OK, I admit it, I could have taken a pair of elevators but I was adding to the calorie-burning count!). Room 493 looked down at the pool, nestled in the arms of the building and understandably popular all day long. 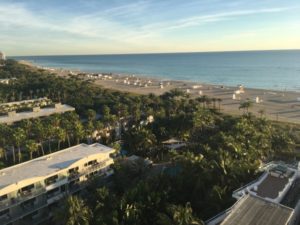 The best view down is from the 11th floor Presidential Suite, which is currently acting as a superb stand-in for the Club Lounge, just about to finish its renovation. The offerings were splendid, with a really good and healthy breakfast – keeping scrambled egg moist in a big blue Le Creuset casserole is a masterpiece, and the coffee, from a WMF 1500S machine, was first class, as was the smoked salmon. Evening wines included the hotel’s own Sara Murphy Mirassou labels, for its 20th anniversary (the wines, Chardonnay and Cabernet Sauvignon by Steven Kent, are both 2013). Really, Club Manager Sofia Dakkouni, from Casablanca, and her colleagues do a great job. 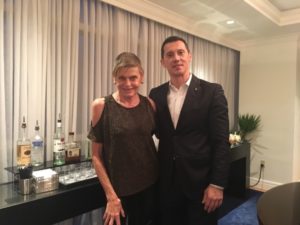 As do ALL the 600 team that I encountered during my short stay – extended by a couple of hours because of a delayed plane. The GM of this luxury hotel, Sase Gjorsovski, came from Acqualina and he is a fabulous manager. He knows it is a difficult hotel to run but his style obviously works. He has halved turnover of staff during his time here, and you can see how happy they all are, and we all know that happy purveyors lead to happy customers. Next time I personally will be EVEN happier if I can fit in the daily morning bootcamp or yoga on the beach, and, of course, get a seat at the Iglesias-Nadal restaurant. MEANWHILE, SEE A SNIPPET OF THE CLUB LOUNGE OFFERING, BELOW.