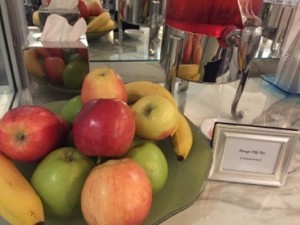 The gym’s food and drink

What makes a luxury hotel best in class, or among the top of the top? Look at the fruit in the gym of The Peninsula Beverly Hills. The gal, travelling merely with the inevitable Porsche Design Rimowa, arrived in plenty of time to head for the gym.   Sometimes fruit is put out at the beginning of the day but not replenished. This hotel is one of 114 Forbes five-star hotels, now organised by Gerry Inzerillo, the long-time friend of One&Only, who arranged a star-studded party for the opening of One&Only Cape Town in 2009. Now he has moved on, and judging by his choice of this hotel, he has found his métier. 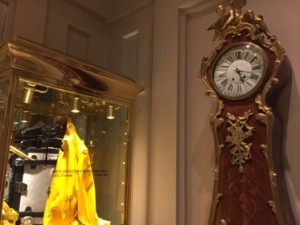 Elegance in the main elevator lobby …

No star-studded parties are needed for this hotel. Before the Grammys on Sunday February 8th, 2015, the hotel was full for days ahead, earlier than usual as followers from the east coast were rushing in to escape the ghastly weather back home. The Grammys are fun, says the hotel boss Offer Nissenbaum. The music crowd knows how to enjoy itself – I hear from others that some award events are mere ceremonies, and not fun. During any such occasion Offer Nissenbaum has three seamstresses on hand to sew red carpet dresses together, to take-em in as the wearers may have lost weight drinking only Champagne, Peninsula label of course, or water. 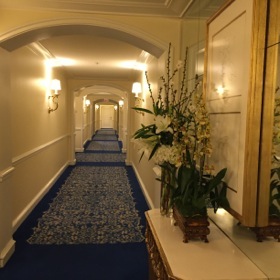 .. and an upper corridor…

Afterwards those same red carpeters will splurge, regardless of whether or not they win, on cheese burgers and ice cream. And they return along elegant corridors of the 194-room hotel to their own little home.   I loved 343, which has a little balcony for looking at the Beverly Hills surroundings. The sun shone in. I had cream walls, and the same rose and blue patterned fabric for curtains, and the half-tester backing to my bed. There is, as Offer Nissenbaum says, a lot that is unique about this hotel. 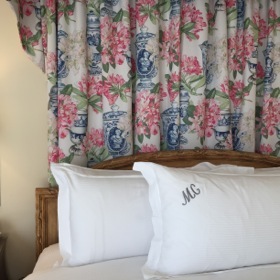 .. and the bed, with monogrammed pillowcase

Most properties bring in the old Armani-through-to-Zegna as inhouse boutiques but not here. No, the biggest display is from 100% Capri, to which I was introduced at J.K. Place Capri – you can also see it at a few other luxury hotels, include Delaire Graff Estate, Stellenbosch, and Hotel de Russie, Rome. 100% Capri, owned by its founder Tony Aiello, specialises in natural linen, often with hints of blue. Some of the windows here at The Peninsula Beverly Hills have full-size mannequins standing in water – hilarious that regular local business tycoons have their daily after-work networking in the mens-club panelled bar of the hotel, and then walk past this beach scene on their way out to their Bentley or Rolls.