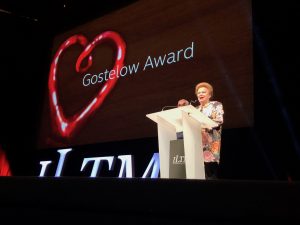 Majestic Barrière is the closest luxury hotel to Palais des Festivals et des Congres, where International Luxury Travel Market ILTM is held.  For the most hectic days of ILTM, therefore, it makes sense for the gal to be based there. ILTM starts, as always, with a Global Forum, and this year’s was, arguably, the best-ever. After superbly inspirational presentations by ILTM’s creative Portfolio Director Alison Gilmore, Swedish economist Dr Kjell Nordström, Wunderman Thompson global Chairman Tamara Ingram OBE and Canyon Ranch’s medical specialist Dr Richard Carmona, the 17th US Surgeon General, it was time for the presentation of the Mary Gostelow Award, to an absolutely unsuspecting Valerie Wilson. 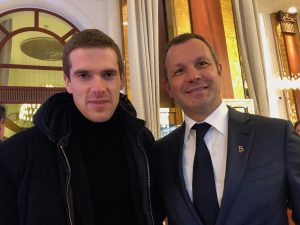 She later joined all winners onstage – from left, above, see Valerie Wilson, 2019; Geoffrey Gelardi, 2018; Matthew Upchurch, 2017, Mary Gostelow, 2016. Then followed three days of meetings, with the 1,848 buyers (travel advisors, concierges, plus some personal butlers) from 76 countries moving around the three floors of the exhibition to meet up with whichever of the 1,884 exhibitors, from 96 countries, was next on their detailed schedule. At breakfast, lunch and all evening long, the buyers were liberally and generously entertained (one night I found I had accepted four cocktails, a supper and an after party). Many of the best events were at Majestic Barrière, which undoubtedly pleased both its owner, Alexandre Desseigne-Barrière, and its GM, Pierre-Louis Renou. 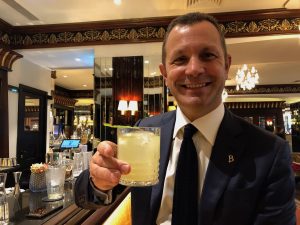 The GM holds a ‘Carl’

Pierre-Louis Renou has just come back from St Barths’ Hotel Carl Gustav, now in the Barrière network – he oversees that Caribbean property.  In its honour, this hotel’s creative mixologist, Pierre Damoiseau, has created Le Carl, a most agreeable concoction of rum, pineapple, olive juice, orange juice: he sent me one up, that night, and it was actually jolly good.  He and his colleagues were working flat out throughout ILTM. I only had time, unfortunately, to make cameo appearances at two breakfasts at the Majestic Barrière’s year-round Beach Club, hosted by Travel+Leisure, and by Leading Hotels of the World. I loved the seafood at a Trump Beach Club lunch, and the best hotel parties are the ones in sixth and seventh floor suites, namely Taj, and Le Cheval Blanc. 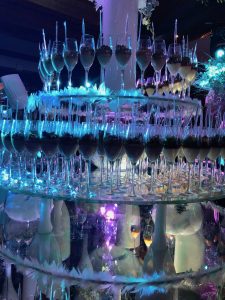 This is a luxury hotel that also throws its own party.  Every year, on the Wednesday of ILTM, Majestic Barrière’s party for its local supporters and the ILTM delegates who are staying in the hotel is magical for its organisation. Nothing seems to be happening until, from 8.30 p.m., there is such security that only those with invitations can get into a winter wonderland of performance, and food and drink (loved the pyramid of champagne glasses holding savoury custard). But by the morning, at least by 7 a.m. it really did look as if nothing HAD happened. The hotel was back to normal, ready to close in two days for one of its annual holidays, now until 27 December, when they open up for New Year. AND NOW, SEE A VIDEO OF ROOM 540, AND THEN TURN TO www.luxury-te.com