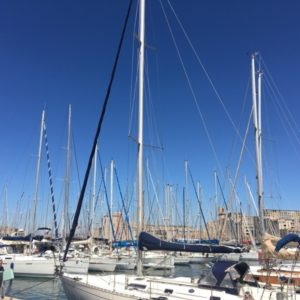 The harbour is a criss-cross of masts

Marseille is one of the great cities in France, with a population of 1.6 million, and a famous sea-trading reputation. it is capital of Provence-Alpes-Côtes d’Azur, and the Mayor, Jean-Claude Gaudin, has been in the job since 1995. One of many architectural innovations during his time is the canopy, above, which Norman Foster designed to celebrate the city’s year as City of Culture, in 2013. The canopy, measuring 46 x 22 m total, is reflective stainless steel; look up at it and everything appears upside down. The canopy is at the apex of the horseshoe-shaped Vieux-Port, and the gal walked past it on her way from one of the horseshoe extremities to the other, to see the old luxury hotel, Sofitel Marseille Vieux Port. 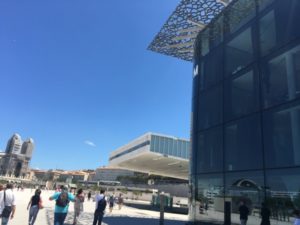 Carré d’Or is old, and new

This, apparently, was THE hotel in town until 2013 – but wait, the story will unfold later. Walking around that horseshoe, to Bassin de Carenage and Bas Fort St-Nicholas, I passed a spider’s web of ships’ masts. I looked across to Fort St-Jean, at the other extremity. This has been brilliantly renovated and added to: the new part is MUCEM, le Musée des Civilisations de l’Europe et de la Méditerranée, which is now integral with a four floor steel structure, by architect Rudy Ricciotti, and next to it is Villa Mediterranée, a wildly-cantilevered building that is also part of what is known, collectively, as Carré d’Or. I caught up with a brilliant Picasso exhibition, of pieces collected by his friend Georges Henri Rivière, who had founded an earlier museum here. 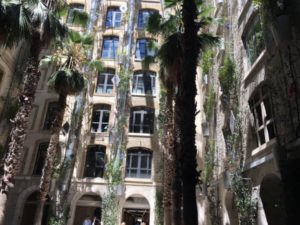 Inner courtyard at The Docks

And then, to be up to date, I walked on along Quai de la Joliette to see how two ancient warehouse developments have been transformed into superb and world-class retail and general lifestyle elevation. One, on the waterside of the Quai street, is Les Terrasses du Port, developed by Hammerson: its 160 stores range from Apple to Zara, via H&M, L’Occitane and Uniglo. The other notable conversion, acrossthe street, is Les Docks Marseille, funded by J.P. Morgan: this is less retail than lifestyle, with art galleries, a bike shop, an art gallery and an extensive and really attractive food emporium where everything, from the on-the-spot-butcher to the bake shop, is organic. 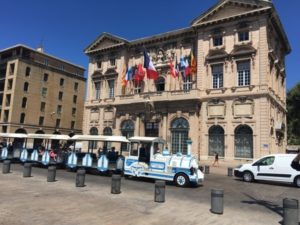 It was a four-hour hike in all and it was hot, really hot. Back in the Vieux Port I watched a tourist train chug past the City Hall, where M. Gaudin has ruled for 21 years. Behind it, up a total of 119 stone steps, I would get to the city’s now-top accommodation, the magnificent InterContinental Marseille – Hotel Dieu, a 194-room luxury hotel that opened in 2013 after years of painstaking conservation and renovation of a site that can be traced back to the 12th century, when the city’s poor and sick were looked after here.  NOW WATCH A VIDEO ON MAGNIFICENT MARSEILLE