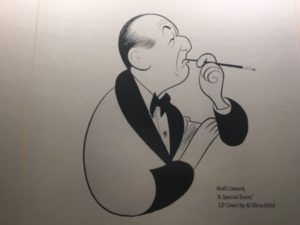 A lot of things have happened to one of the world’s top luxury hotels, Mandarin Oriental Bangkok, since the gal was last there. In the past two years a lot of money, a tremendous amount of money, has been spent taking the oldest part of the hotel, the two-floor Authors’ Wing, back to its original 1876 glory. Look at the result, above (is it true it was originally called the Royal Wing until Kurt Wachtveitl changed its name?). Now, once again it is glorious outside, with its open balconies restored, and inside authors still dominate. 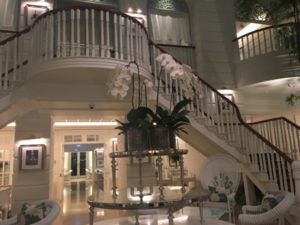 Stairs lead up to the staggeringly-beautiful Royal Suite

There are ground floor salons, and suitable artworks, honouring, in alphabetical order, Joseph Conrad, Noel Coward, Somerset Maugham and James Michener. There is also a salon for the much-adored Khun Angkana, Ms Angkana Kalatananda, who worked at the hotel for over 60 years and still, aged 95, calls in at least once a week. The colouring throughout the entire ground floor, by the way, is off-white, with pale pink highlights and memorable green-leaf fabric – the whole new look is by designer P49, with an ongoing talent of help, especially on colour, from the hotel’s multi-talented GM, Khun Amanda, also known as Amanda Hyndman. 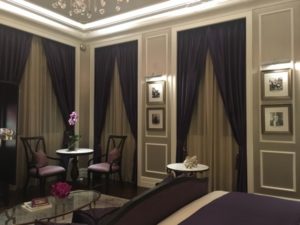 Up 18 stairs from the ground floor is the new Royal Suite, a 6,000 sq ft glory that has six bedrooms, including an integral two-room suite. Khun Amanda chose most of the colourings here, say a soft sandalwood and white for the salon and a soft purple to go with the grey and white of one of the master bedrooms, which not surprisingly comes with its own gym and spa room and two closet rooms (the one for the guy has much more space than the one for the girl, by the way). And in the five-floor tower block behind, what were two bedrooms have been fused into one, to result in the sheer beauty that was my suite, #352 – see the video below. 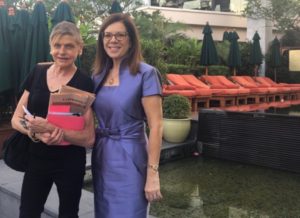 My stay at this luxury hotel was a haze of beauty, softest grey colours and white, in a suite that came with kitchen, and a small balcony. And there was the beauty of dining, and breakfasting, right by the river, looking across to the hotel’s gym, where I had worked out long before day decided it was time to break – we started dinner at Ciao Terrazza with Danilo Aiasso’s wafer-thin truffle focaccia, oh boy was that sensational, and finished with limoncello sorbet, and, at breakfast, the vivid persimmon colour of perfect pieces of papaya went so well with soft white cheese, set on a bright green mat. I had had a boost of colour, by the way, checking out the completely-redone retail arcade leading from the hotel’s main lobby to the Author’s Wing. This is now a walkway of softest champagne-coloured marble and the stores, I am sure chosen by The Talented Ms A, include a branch of New York’s Metropolitan Museum of Art bookstore as well as a big Jim Thompson silk emporium, and Rimowa luggage in a palette of jewel hues. And there was Ms A, Khun Amanda herself, to wave me off. She greets every new arrival – someone coming in later today was making their 260th stay – and she waves them farewell too. As I commented in the Maldives not long ago, luxury can be determined by how long a GM waves a departing guest goodbye (no wonder Mandarin Oriental Bangkok was first hotel in Thailand to get Forbes Five Star, which it also has for its spa). NOW SEE THE VIDEO, BELOW