This is one of the most beautiful views of New York’s Central Park that the gal remembers.  Yes, you can get super views from some, but not all, rooms in, going from west to east in an anticlockwise manner, Trump International, Mandarin Oriental New York, Jumeirah Essex House, Ritz-Carlton Central Park and The Pierre (by Taj), but this has to be one of the best.

It is taken from suite 3701 at Jumeirah Essex House.  This is an incredible 600-room place, incredible in that it works.  With a structure going back to 1931, and two separate banks of elevators soaring to floor 20 or floor 40, and 140 apartments which sometimes have owners who think they own the whole place, and lovely union employees who sometimes also think they own the whole place…  But amazingly, it does work.

The new décor is divine – love Pierre Yves Rochon’s stunning tomato and charcoal and salmon corridor carpets, and the tomato rattan walls next to the upper-floor elevators, and the easy ergonomics of the bedrooms.

A slight connectivity hitch was personally fixed by the head of IT in a few minutes.  Guest relations Patrick was so courteous he made one want to return, soon.  The flowers in the lobby, which looked a perfectly-new yellow display yesterday evening, changed to perfectly-new pink, today (and no, it was not the eye of the beholder).

There is a 24-hour super-gym, with onsite trainers; bicycles are available free, you merely cross the road to the Park.  Join the runners who do the southern circuit, or the northern Reservoir circuit, what seems like 24/7.

Get retail exercise by heading a few blocks west to the Time-Warner Center stores, or east to Fifth Avenue.  Or merely stay in your room, if you are lucky, for that sensational view.

Central Park is, of course, included in 1,000 Places to See Before You Die – Patricia Schultz’s second edition is now out, and selling fast.  Surprisingly, perhaps, it does not warrant an entry all to itself.  It is tucked into New York (‘New York… moves so fast, it takes energy just to stand still,’ says Barbara Walters at the start of the New York section).

It does give basic facts. Central Park was laid out 1859-1870 to a design by Frederick Law Olmsted and Calvert Vaux, and it covers 843 acres in all.

Among the many special happenings are Shakespeare in the Park every June through August – and tickets are FREE!  June 5-30, 2012, features As You Like It  Lily Rabe as Rosalind (director is Daniel Sullivan, who directed acclaimed productions of All’s Well That Ends Well, The Merchant of Venice and Twelfth Night in the Park).

Then there is a pause, and somehow Shakespeare gave way to… Stephen Sondheim.  The second 2012 show is Sondheim’s Into The Woods, July 23-August 25, 2012.  Director is Timothy Sheader, with the cooperation of Liam Steel.

The story, by James Lapine, revolves around a witch’s curse that condemns the Baker and his Wife to a life without children. They embark on a quest to find the four items required to break the spell: the cow as white as milk, the cape as red as blood, the hair as yellow as corn, and the slipper as pure as gold.

Will they succeed?  Apparently it is a witty and somewhat irreverent recap of such stories as Jack and the Beanstalk, Little Red Riding Hood, and Cinderella.

Looking back, from the Park, at Jumeirah Essex House

But a gal’s short memory nonetheless seems to recall that a Mr Singer, of Singer Sewing Machines, not only fell in love with dancer Isadora Duncan – she who later hanged herself unintentionally when wearing a long scarf in an open car – but he also introduced starlings to Central Park.

Aha, the memory is wrong.  It was not Singer but Schieffelin (another malapropism of Ss!).  In 1890 a Shakespeare fan called Eugene Schieffelin began importing from England all the birds mentioned in the Bard’s works with the idea of releasing the same into Central Park.

He started with 60 starlings and then a further 40 (he also tried with skylarks and song thrushes but they did not fit in well).  The starlings did, and spread their wings, literally – you find them now even in Alaska.

Isadora Duncan (without a scarf)

The memory was right with Isadora Duncan, at least to a degree.  Aged 50, she was a passenger in an Amilcar, with open-spoke wheels.  She wore a long trailing scarf as she was being driven through Nice on September 14th, 1927, and the scarf end got caught in one of the wheels.

Hers was something of, well, a tragic life.  She had had two illegitimate children, one by theatre designer Gordon Craig and the other by Paris Singer, son of sewing machine magnate  s w Isaac Singer. The kids were in a car with their nanny in 1913, the driver stalled, forgot to leave the handbrake on when he got out to see what was the matter.

The car rolled into the Seine and both kids, and the nanny, were drowned. Ever the melodramatic, she apparently begged an unknown waiter to give her another child, who only lived a few hours. She married the Russian poet Sergei Yesenin, who became an alcoholic and committed suicide.  She fell in love with a female poet, Mercedes de Acosta, but was being driven by a man, a French-Italian mechanic she called Bugatti, on the night she died.

Apparently, still more melodrama, she had earlier said goodbye to friends, Je vais à l’amour” (I am off to love)… and the scarf, by the way, was no ordinary scarf.  It was hand-painted silk, by Roman Chatov… 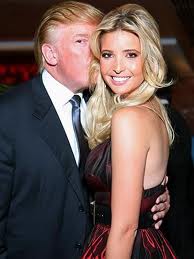 No chip off the old block, the brilliant Ivanka

Another of the luxury hotels overlooking Central Park, Trump International (sister to that other luxury other, Trump Soho), has hand-painted wallpapers, showing cherry blossom, in its manicure-pedicure room.  This is all part of the $8 million spa renovation overseen by the ever-talented Ivanka Trump, for whom the gal has an increasing amount of time.

Although we have not yet met, I LIKE THE SOUND OF HER.  She runs her hotels, she plans such future hotels as the conversion of Washington DC’s historic post office, she redesigns spas, everything.  She writes a blog for HOTELS magazine, bible of the hotel industry, but she undoubtedly does not write her own press releases (or if she does she needs to go back to primary school).

The Oxford English Dictionary defines boast (the verb) as a person praising oneself or something else.  For too long hotels have wrongly been ‘boasting’ oversized rooms.  Now we have the walls of New York Trump spa ‘boasting’ that they are hand-painted cherry.  Bad mark, Mrs Jared Kushner.