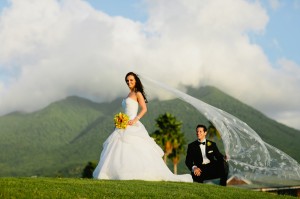 Where would one get married in Berlin?  At the Adlon Kempinski, to be able to parade down the red-carpeted stairs from the upper floor to the main floor of the lobby.

When the gal met Jessica Schwartz and Neil Cohen on Silver Cloud sailing around the Gulf over Christmas 2010, they were determined to get married at Four Seasons Resort Nevis.

Sure enough, they achieved it – they were married there 11/11/11 (how did they carry that divine dress, and its veil, there?).  They are both top dentists, working in New York.

On the cruise, from Dubai to Dubai via other Emirates, Bahrain, Oman and Qatar, they were travelling with her parents, Richard and Rosanne, and her brother Jason.   I loved my own visit to Four Seasons Resort Nevis – My Man told me afterwards they even have baby-changing stations in the men’s washrooms. 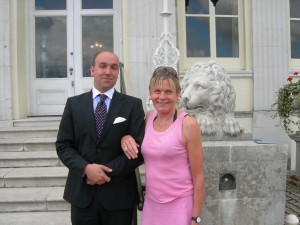 Where else are great wedding venues? At Le Touessrok, Mauritius, they encourage the happy couple to plant a commemorative tree, as an encouragement to return and see it grow.

At Stoke Park, 20 minutes’ drive from Heathrow, friends and family – and even the happy couple – can sneak away at some point for a round of the 27-hole Harry S Colt championship golf course.

You can also have a session with Pierce Brosnan’s personal trainer, Simon Waterstone, and, by yourselves, follow the ‘Bond’ fitness trail around the 350-acre estate.  You will marry in, or in the grounds, of the main house, designed in the 18th century by James Wyatt.

Is this (the 'figure' on left) the world's most outrageous wedding cake?

Of course you need a cake, wherever you are.  Some cakes today are, well, outrageous.  Others are more subdued.  I can think of nothing nicer than a wedding cake filled not with cream but with Greek yoghurt, eaten on a terrace of a Mykonos hotel (say the lovely Mykonos Grace Hotel) looking down at the Mediterranean.

Alternatively you can of course make your own cake.  James Middleton, younger brother of Kate – the Duchess of Cambridge, naturally – runs thecakekitcompany.com   Buy your requested kit, it comes with appropriate ingredients, instructions and even the right-shaped tin, say a pistol for a shotgun wedding.

It is helpful to have a beach.  No-one offers more beaches than Jumeirah.  They seem to own half of Dubai.  Think of the beaches that accompany Burj-al Arab, and Jumeirah Beach, and Madinat Jumeirah, and now they are moving into Abu Dhabi and, far away for them in the western Mediterranean, Mallorca (yes, there are some Jumeirahs which do not have beaches, say New York, London, Frankfurt, Rome and Shanghai, but Jumeirah’s message, continually put across, in his divine Irish lilt, by Executive Chairman Gerald Lawless is ‘Jumeirah – Stay Different’).

A favourite Jumeirah beach is certainly the one off  luxury resort Madinat Jumeirah’s Mina a’Salam.  Some years ago Serge Zaalof (now moved to Atlantis The Palm) invited a lady for a pre-breakfast run.  He took her to said beach, got in a speedboat and 20 minutes later they disembarked at Greenland, the only one of the artificial World islands at that time to be planted, with trees, and built on, with a house.

This was the showpiece, selling the individual islands.  So, friend Zaalof sat down and smoked a cigar and his friend ran round and round the island.  Who else has run nine times round Greenland before breakfast? 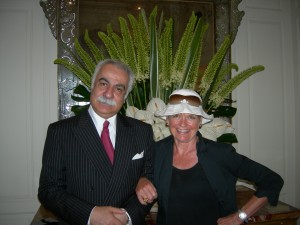 Every wedding requires an unbelievable amount of pre-event shopping.  Today there are bridal showers, which probably require the bride-to-be going shopping to return the ten toasters she was given at showers that she obviously does not want.

Nothing like a day’s shopping in Rome’s Via Condotti, at the bottom of the Spanish Steps.  Named for the conduits which carried water to the Baths of Agrippa, today it is home to Armani, Bulgari, Cartier, Ferragamo and Hermès. Other nearby areas include Via Borgognona, with Dolce & Gabbana and Fendi, and Via Frattina, with Tiffany and Versace.

Stay at the top of the Steps, at the comfortable Hôtel de la Ville or the super-stylish Eden, a Leading hotel (one of the most memorable breakfasts, anywhere, with seventh floor rooftop views over the city, a choice of ricottas). 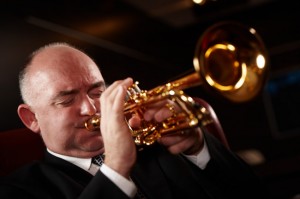 At some point during the wedding music is required.  Go different, and get some jazz.  Australia’s best-known trumpeter James Morrison performed at the opening ceremony of the Sydney Olympics.  Now he has been contracted for eight concerts a year in the bar fronting the soaring open-atrium of InterContinental Melbourne The Rialto.

This unique structure was built in 1891 as two parallel buildings, a street between – now that atrium.  The 253-room hotel has not only a creative GM, Joerg Boeckeler (he keeps bees on his rooftop, next to the glass-walled swimming pool) but a really lovely and helpful Concierge, James Ridenour, from Vancouver.

Don’t forget art.  If the surroundings for the wedding are not superb, use a background painting.  This psychedelic art is by Beverly Fishman, one of the artists featured in the current issue of VIEWS, the glorious art magazine of the Baur au Lac, Zurich.

Author Gigi Kracht, wife of the luxury hotel’s owner Andrea Kracht (Chairman of The Leading Hotels of the World) has interviewed 17 female artists for this issue of VIEWS.  Separately, she is also the curator of the Baur au Lac’s highly-praised Art In The Park outdoor sculpture exhibitions.

The ninth such exhibition, opening Sunday June 10th, 2012, is deliberately timed to coincide with Art Basel, which is June 14-17, 2012.  Gollee, after all this chat there is hardly time to get married….