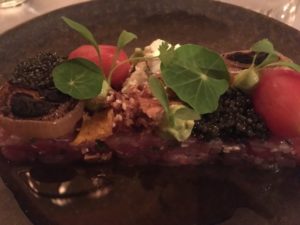 The gal has written before about Waldorf Astoria New York, and its Peacock Alley, once walkway for over 25,000 fashionistas parading through in a day. Now, as of late 2015, it has a new must-be-seen venue, La Chine, a restaurant that the luxury hotel’s owners are determined will be the best not only in the Big Apple, but nationally and even further afield. The hotel was allegedly given a mere two months to get La Chine up and running, but, like a baby, you cannot hurry nature. Six months, in this case, was the minimum, but, thanks to designers Studio Gaia and an unusually cooperative New York labour pool, the total 141-seat restaurant was done in time. Six months after first talking about it, it opened, to immediate applause. 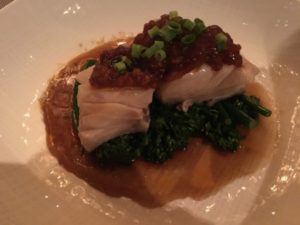 Week-long, Wall Street and other bigwigs frequent it, for their own pleasure as well as entertaining potential Sino-significant contacts. At weekends, local Asians, often with big families in tow, come here to lunch and to dine (on Saturdays and Sundays, the beverage spend drops, not surprisingly, though food sales up as there are dim sum After Noon teas at weekends). During the construction, restaurant chef Kong Khai Meng and three colleagues were dispatched to China, where there are outstanding restaurants at both Waldorf Astoria Beijing and Waldorf Astoria Shanghai on The Bund. Over 300 applied for a mere seven roles as servers, here – I was impressed by how experienced they are, led by a discreet manager, Markus Tschuschnig. 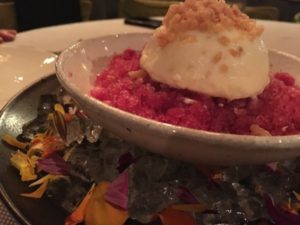 The dessert was sheer heaven

We sat at one of the four banquette tables around a central display of flowers: overhead, a three-tier Art Deco glass lampshade was fixed direct to the ceiling, and at the far end a whole wall rendering of horses was themed for Year of the Horse, because the chairman of Anbang is a horse-lover. Behind this is the private dining room, which seats over 20, with a private street entrance. Instead of the suggested six-course tasting menu I started with big-eye tuna tartare, with caviar, pickles, tomatoes and soy vinegar, and went on to black cod with soy beans and wild fern. The dessert, fromage blanc mousse on red ice granite, was sensational – and then we opened our fortune cookies (mine said ‘life consists not in holding good cards but in playing those you hold well’). We had been drinking, throughout, an Argentinian Pinot Noir, Chacra from Barda. 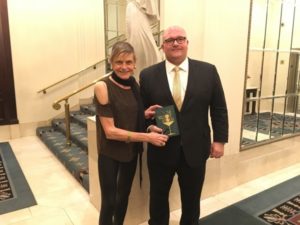 Frank Caiafa holds a copy of his new book

Talking of drinks, there was another treat in store. Frank Caiafa, beverage manager at Peacock Alley, has spent five years updating two hotel cocktail books, first published in 1931 and 1934. The result is the just-published The Waldorf Astoria Bar Book, from Penguin. Its 406 pages include anecdotes to go with all the recipes. I picked up on The Waldorf, which requires 2 oz. Rittenhouse rye whiskey and one ounce Martini & Rossi sweet vermouth. Put in a mixing glass with 1/4 oz. Pernod Original absinthe (or Granier or Pernod) and two dashes Angostura bitters, plus ice. Stir for 30 seconds, strain into a chilled cocktail glass and garnish with lemon peel, and you are ready to go. This is a luxury hotel that is more a way of life than just bedrooms – SEE THE VIDEO BELOW.