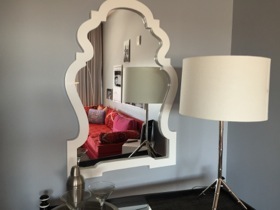 Yes, but what is it like actually staying in the Texas capital’s top lifestyle hotel, W Austin, the 251-room beauty that gives the techies drawn to the Google Lab just across Lavaca Street the kind of modern luxury hotel they crave? Upper corridors have grey carpets, unadorned grey or deep persimmon walls, and lots of plain concrete columns. The gal was in 1606,  an 839 sq ft Fantastic Suite, lots more greys, and white and a section of a big concrete pillar in both the bedroom and the same-size salon. There are elements of surprise, say looking in the ogee-shaped mirror at the reflection of the salon’s multi-hued seating. 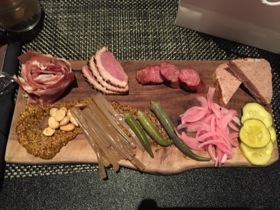 A welcome charcuterie board

I thought the chef must be German as my welcome was a platter of charcuterie ample enough to feed half the Austin Reds, but I find out later that there is an inhouse butcher who loves making these pâtés and sausages – and Texans, as I was to discover, love their sausages and any other kind of carnivore edible. I had lots of Smart Water, which I guess is energising, and Hollywood-boudoir leather-studded white leather pouffes, in two sizes (table and two stools, in case Alice-in-Wonderland came to tea). Entertaining here would be rather swell, actually. My room service order was served with the style and flourish of Ralph Fiennes in The Grand Budapest Hotel. 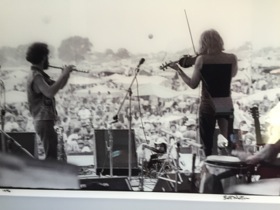 One of the wall-hung photos, by Scott Newton

Whereas the corridors are unadorned one wall of my salon is a gallery of music of the past and present, a reminder that the Austin City Limits PBS programme has been broadcast from this part of town ever since the first episode, October 14th, 1974 (it starred Willie Nelson). The photographs are by Scott Newton, who has been chronicling the music in town since the early 1970s. The hotel certainly has a sense of music subconsiously reverberating through it, from the Bang & Olufsen player here in the Fantastic Suite to the vinyl collection down in the Library and, outside on the terrace, the live music that apparently plays every weekend. 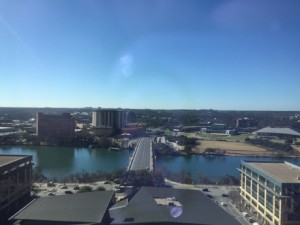 Looking down to Converse Bridge over Lady Bird Lake

Soon there will be an overkill of luxury hotels nearby – I asked W Austin’s GM, Drew McQuade, who else is coming and he said ‘who is NOT coming?’. Few will, however, have the view that I have, down to Congress Bridge across Lady Bird Lake. And it seems hard for anyone to recreate this young-at-heart country-beat ambience that defines W Austin.