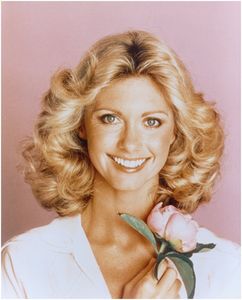 The opening Forum of the annual Virtuoso Travel Week VTW at the luxury Bellagio hotel in Las Vegas had a surprise finale in the form of Olivia Newton-John (Virtuoso leader Matthew Upchurch loves surprises). OK, so Olivia was performing in Vegas but, says the gal, it was a stroke of genius to get her. She sang a couple of songs and then sat and talked with Matthew Upchurch about her own healing hotel, Gaia Retreat and Spa in Bangalow NSW – not to be confused with Gaia in Papagayo. 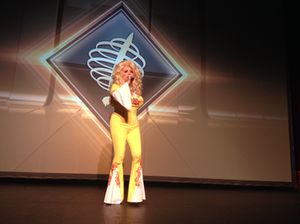 I went to the Bangalow Gaia seven years ago, and remember being impressed by the fabulous rolling countryside, and activities that included bellydancing for beginners, and bush walks through Nightcap National Park. Now from one entertainer to another. No, this is not really Dolly Parton but a pretty good imitation – were it her, she could have talked about Dollywood, her own theme park, in Pigeon Forge TN. The real Dolly Parton wowed the final session at the 2014 Glastonbury Festival, which must have done wonders for visitor numbers to Dollywood. The fake Dolly Parton was one of the entertainers at the first night party of this year’s VTW, fortunately a buffet. 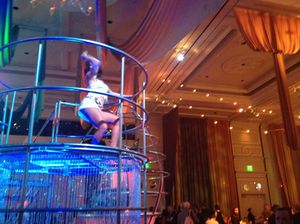 Dancing at the party

Try catering a party for 4,200, the total number of delegates at VTW – and then add on the dozens of helpers and organizers. The secret tonight seemed to be ample drinks stations, quite a lot of food stations and constant entertainment, be it Dolly Parton or dancing on top of a high-high stage. And then, for the next three days, at every opportunity there were private parties. A succession of foot-sore people stood guard at the base of one of the elevator areas holding a One&Only sign, ready to take the invited to that suite. Belmond, by contrast, hired The Bank nightclub one evening, for its intimate gathering of several hundred. 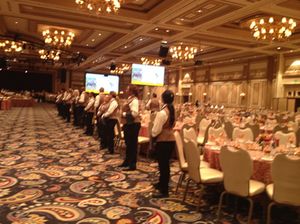 A guard of honour awaits at breakfast

Four Seasons had a continuous shuttle along The Strip to its gorgeous luxury hotel (no gaming!). Guests came early, and went on somewhere else, came here in the middle of the evening – as the Alain Milliat jam between the Poilâne sandwich – or finished their gallivanting here. Another night, ILTM held a white-clothes party poolside, at Bellagio. The hotel’s staff never batted an eyelash at anything. I loved the way, every breakfast, they lined the approach, as a guard of honour, and because delegates’ name labels were fabulously clear, they addressed you by name as you walked.