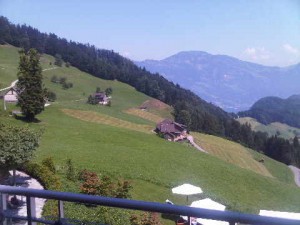 The view from Villa Honegg, near Bürgenstock

Some years ago tourism and hospitality experimented with virtual views. Wake up in Moscow in January to your pre-programmed ‘view of wildlife in Serengeti’ – where, guess what, one can now REALLY stay in a lodge already run by Four Seasons, though its name has not yet changed.

As far as the gal knows, that idea of virtuality never took off.  But there are, anyway, so many unlimited views that are real.  Why divert from nature?  Ten minutes’ drive from what will be the totally amazing Bürgenstock Resort high above Lake Lucerne, we dropped in, so to speak, for lunch at Villa Honegg. 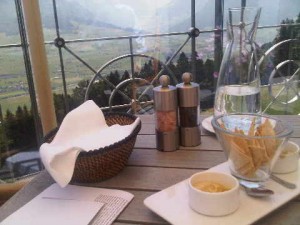 Table with a view…

What a find.  I had not even heard about this idyllic 23-bedroom place.  We sat out on the terrace in blazing Swiss sun, and breathed the 100-percent-pure air (Beijing and Shanghai, eat your hearts out).

In Swiss style, we were brought a few nibbles, in this case hommus, a reminder of how international the world is becoming.  How did this Middle Eastern appetizer come to be served in the middle of Switzerland? 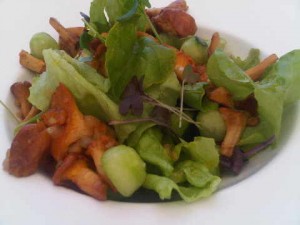 .. for a bio-organic salad…

After that came a bio-organic salad as we talked about the hotel’s history.  In 1905, Emil Durrer, a carpenter, and the nephew of Franz Josef Bucher-Durrer, founder of Bürgenstock, had been helping out there, but chose to do his own thing.

He got the land, built a 72-room hotel and moved in with is wife Louise and what ended up as a kid-count of six, which was to prove useful.  Guests in those days stayed three to four weeks, sometimes longer.  Summer long, they arrived by the Bürgenstock funicular, and then by horse and carriage, and while there they played croquet, billiards, skittles and tennis. 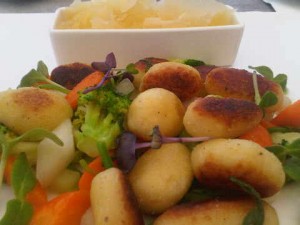 .. and gnocchi with parmesan (and 100 percent fresh air)

By now we were on to chef Thomas Amschutz’s gnocchi with lemon butter (he has 14 Gault Millau points).  There was lots of ice for our much-needed water.  During WWI wounded Germans were housed here, and one of their winter jobs was making ice.

Tree trunks were set eight inches apart, and water poured in.  It set. The ice blocks were stored in the cellar and lasted all summer.  Shortly afterwards, tragically, Emil Durrer died after falling from a painting scaffold.  First his widow ran the Villa, and then son Karl Durrer-Züger took over, helped by siblings. 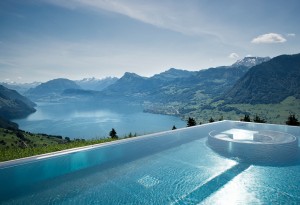 Look down at the outside pool

As we ate we looked down at the outdoor pool, kept at 34 degrees – recent additions to the facilities include an indoor pool (26 degrees), and a spa, and a massively-masculine lobby lounge with American-Bar-type soft leather seating and a fireplace that works.

I think, like the first visitors nearly 110 years ago, it would be better like this, in summer, when I could borrow one of the hotel’s Thömus electric bikes and, without using the electricity, pedal up Mount Bürgenberg. 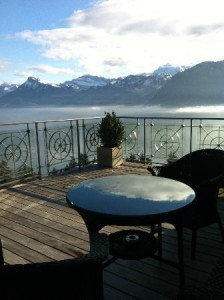 And yet another view

But for skiers winter, obviously, is the time, and this is a luxury hotel that is open year-round.  See a coat rack in the lobby holding a supply of enormous full-length fur coats, with hoods.

Borrow only: like bathrobes, you are certainly charged if a coat decides to walk.  Big thick felt slippers, large enough for any giant, are also supplied by the dozen. Today’s boss, Peter Durrer (no relation to its founder), thinks of everything.

They show movies, and television shows, and will entertain for anyone’s birthday in the hotel’s 20-seat cinema screening room. Watch the latest blockbuster before your friends back home.

And look, if you will, at clever design features brought in by Jestico&Whiles, the designers on this project. Your headboard is formed of ‘fish-scales’ of black leather, each scale held merely at the top. This pattern exactly echoes the outside walls of the hotel, formed of wood fish-scales, in typical local style. 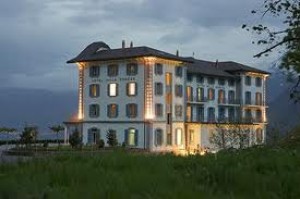 THIS is Villa Honegg

But the villa itself is just not typical of anything.  It is a solitary performer, a solo act looking down at the land below, a bit of a reminder of another luxury hotel, Palazzo Terranova, up 1.5 miles of extremely rugged track on a hilltop about an hour from Florence.

That one, built in 1800, is now owned by Alexander Lebedev, the Russian oligarch whose portfolio includes 15 percent of Aeroflot and, for his sins, the whole of the UK’s Evening Standard and Independent newspapers (his son Evgeny oversees that luxury hotel, where we were looked after by Valentina Morriconi, coincidentally the step-daughter of The Hassler’s owner and GM Roberto Wirth, who even more coincidentally is descended, albeit diagonally, from Franz Josef Bucher-Durrer…).