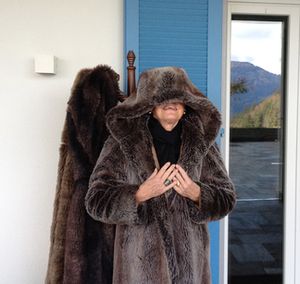 Try one of the hooded fur coats for size

There are yet more unique features at the luxury Villa Honegg, high above Lake Lucerne. Help yourself, loan only, to the fur coat that you favour the most – the gal was laughing hard as she felt herself ‘disappear’ into a coat, which would undoubtedly be highly desirable when it gets really cold. Although the hotel is 480 metres above the lake, the single winding road up to it is clear year-round, apparently. Local farmers, whose wooden all-in chalets – the family, and its animals, and its supplies of hay and so on – are dotted all round the hotel, and local authorities are out with the ploughs immediately. What a history this villa has.  It was built 1905 by a local carpenter, Emil Durrer, whose uncle, Franz Josef Bucher-Durrer, had built the nearby Bürgenstock complex. Emil Durrer and his wife Louise Traxler, who had six children, opened, the following year, what was then a 72-room hotel (presumably the rooms were miniscule and without private bathrooms).  They picked guests up, by horse and carriage, from Bürgenstock’s funicular, coming up from the lake, and sometimes sensible guests stayed all summer.  During World War One, wounded German prisoners were housed here, and they cut peat for fuel and, in winter, ice out of hollowed, flat tree trunks – it was stored, for summer-long use. After Emil Durrer was killed falling off a scaffold, the busy Louise took over, followed by a son. Later, the villa became a health resort before being sold to its present Switzerland-loving owner in 2007. 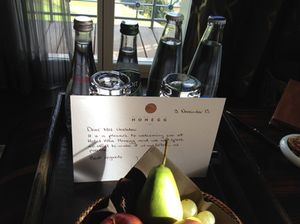 Welcome, with a tasting of waters

I am immediately reminded that I am in Switzerland, and not only by the cowbells that ting-aling continually. Get to suite 25, and the Do No Disturb sign is, like the Kleenex cover, cow-hide. The bathroom has a heated floor, and an electric towel rail that you can, unlike most heated rails, turn on and off easily, with a bright red light showing when it is on. Main light switches are also simple switch up, for on, down, for off.  I like this.  I also like a welcome of a water selection, though later I look forward to some Swiss wine.  GM Peter Durrer is also building up a list, by the way, of non-Swiss wines owned by Swiss (I mention the Hess Collection in Napa, with its outstanding art collection, but no, he says, his regular locals want European wine). 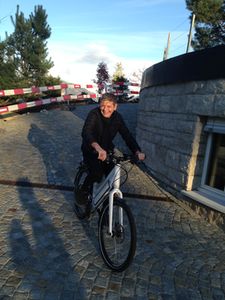 These local residents are extremely important, and they love this hotel. They even make good use of its 20-seat cinema screening room, which has a regular programme of Swiss film dinners. Aperitif first, watch the movie, always filmed in Switzerland or featuring Swiss actors, and then have a set dinner.  Many locals also come up for weekends, for staycations.  Obviously they are addicted to the hotel’s sexy indoor-outdoor pool, but there is also outdoor hiking, and biking.  Serious bikers, I am told, bring their own machines.  I had to make do, for all of a hundred metres, with one of their Thömus electric bikes.  Never again.  The thing kept on surging forward, with a thrust of electric power.  It was in charge, not me.  I stood it just about as long as the tandem which My Man and I tried at Keswick Hall, near Charlottesville VA – that ride ended because My Man, in front, thought I, behind, was not pedalling at all (he was right). 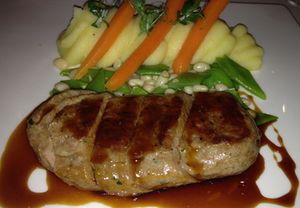 The signature meatloaf, as on Swiss…

I have already mentioned that today’s GM, Peter Durrer – no relation – once worked with Swissair.  Now the villa is partnering with its successor, closely. Its chef Thomas Amschutz, literally brought up on a neighbouring farm here, had his famous meatloaf featured on Swiss’ premium menus for two months this year, and there was substantial publicity in the inflight magazine.  Thomas Amschutz was also flown to Kyiv to guest-chef when Swiss opened its new route there recently.  Here, at the hotel, obviously I had to try the meatloaf, ground beef from Holzen Metzgerei in Ennetbürgen, served with carrots, mixed beans and mash (all the veggies came from Mundo AG in Rothenburg – they do a great job, here, in sharing provenance). 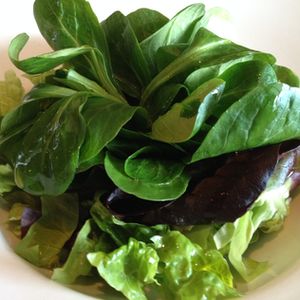 ..which I had with a salad

Of course I had a salad, with leaves from Mundo AG. The Peugeot salt and pepper mills hold ordinary black pepper corns but pink salt granules, from the Himalayas.  They had suggested a Swiss aperitif, say a Riesling Sylvaner or Appenzell’s Gin 27, but I went straight into Tre Talenti Bärtsch-Tamboirini, Mathier, 2011, St Gallen, which is a blend of Cornalin, plus Merlot and Pinot. The breads were so good I could have eaten them forever (Peter Durrer said when he realized that no-one was complimenting on his breads he knew he had to find a new baker; he chose Fredy’s in Baden, and the compliments pour in). 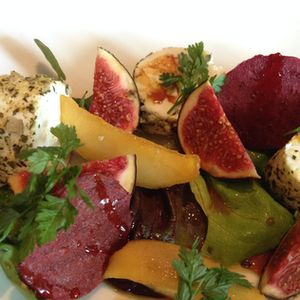 This is my kind of food, my kind of dining. Linens are the best, and crisply starched, but overall restaurant-appeal is ultra informal.  You can dine where you want, in the main dining room, or in the adjacent main library-lounge, or downstairs in the lobby or, weather permitting, upstairs on the restaurant terrace. As soon as you start your main meal, a platter comes with that bread, and, say, Waldorf salad butter, a beetroot-hommus dip, and olive oil. You design your own meal, pretty much: I asked for a main-course side of a starter, a salad with goat cheese from Geissalheimet Meierskahlen in Stans. No problem, with a big smile. At breakfast, from 7.30am, by 7.20 they appeared genuinely thrilled to see me (‘this is what we are here for’). And breakfast is all included, and I mean everything – a three-tier stand with cold cuts, cheese and fruit and home-made preserves, and breads and Viennoise, and then as much as you want, ordered from a copious menu. Would I also like ginger water, I was asked. This really is a most unusual luxury hotel.