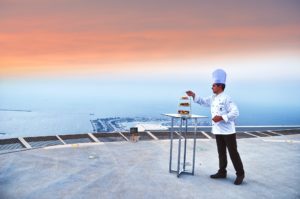 Brunch, featured by so many luxury hotels around the world, is not a new phenomenon.  According to Wikipedia it was, says the gal, the English who invented the combination of breakfast and lunch, way back in the late 19th century. See what William Grimes, in At Brunch: The More Bizarre The Better, wrote in 1895: “Instead of England’s early Sunday dinner, a post-church ordeal of heavy meats and savory pies, why not a new meal, served around noon, that starts with tea or coffee, marmalade and other breakfast fixtures before moving along to the heavier fare? By eliminating the need to get up early on Sunday, brunch would make life brighter for Saturday-night carousers. It would promote human happiness in other ways as well”. 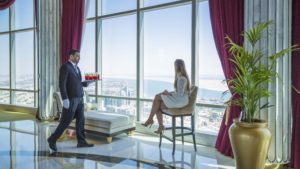 Today everyone tries, as with Afternoon Tea, to offer uniqueness when it comes to brunch, which in UAE is Fridays and/or Saturday.  In Abu Dhabi, St Regis has several good ideas. Its highly-popular best-Italian buffet, every Saturday, indoor or out at Villa Toscana, is now complemented fortnightly by two extra weekend events, both offering alcohol or no-alcohol pricing. The last Friday of each month is a moving feast Brunch in the Clouds, taking over the entire 12,000 sq ft Abu Dhabi Suite occupying the bridge at the top of the building’s pair of 50-floor towers – enter by private elevator and as well as the main buffet in the suite’s dining room there are buffet stations in smaller rooms, massages offered in the private spa and kids’ movies in its screening room. 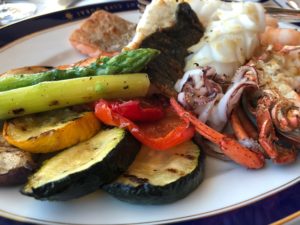 Not quite brunch, but later in the day, comes sunset: on the second Friday of each month St Regis Abu Dhabi hosts Sunset Supper, saxophonist included, up on its 800-foot-high helipad. Innovation is the name of the game not only in filling rooms throughout the UAE but in getting hotel guests to stay in, to dine, and persuading others, including locals, to drop in as well. One challenge in another Emirate, Dubai, is not only the increasing spread of the city and how long it takes to drive from, say, One&Only The Palm, at the tip of Palm Jumeirah, to Raffles Dubai. Another Dubai challenge is the quantity, if not always quality, explosion of eating places.  Bulgari Resort and Residences Dubai, Jumeirah Bay, already has a stunning Italian restaurant, by Niko Romito, and it now offers weekend brunch at its Yacht Club. 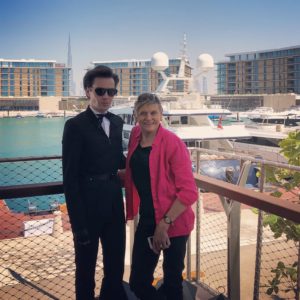 The experience reminded me of lunch at Monte-Carlo Yacht Club. Both are like super-yachts, with all-wall windows and terraces with thick white cords as balustrades.  Brunch here, however, is brought to you rather than you go to it, food wise.  A mezze automatically comes, each dish Italianized (see most of the nine’ family members’ of mozzarella, above). Some then choose a pasta but we went straight on a main course, which is your own selection from a variety of meats and seafoods.  Sybaritic Single, in yet another divine Dior design, somehow had room for desserts, which came as a trio, each exquisite. Pair a luxury hotel with anything Italian and it has a good chance of succeeding. THIS IS ST REGIS ABU DHABI’S ITALIAN BRUNCH