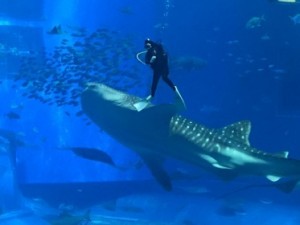 Cleaning a tank, watched by a whale shark

Still on the subject of learning at sea, the gal started her education today with a Japanese mythology lesson showing the Namazu, a giant catfish living under the country whose wriggles cause volcanic eruptions, typhoons and tsunami – this was followed by another 45-minute class on marine cuisine. We learned about fugu blowfish, why those dealing in it have to be so skilled (only 35% pass the required exam) and what you can do with it. And then it was time to leave the luxury floating hotel that is Silver Discoverer for an absolutely memorable visit to Okinawa’s Churaumi Aquarium. 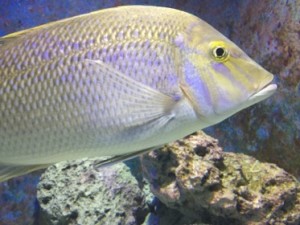 The aquarium has about 190,000 sq ft of floor space, with 77 tanks, and is brilliantly organised. You pass from an initial touch pool, which actually encourages you to put your hands in to feel what some of these little things look like: being Japan, of course there are rows of washbasins right there, with automatic hand driers to satisfy the hygiene fanatic. You pass from one tank to a corridor of small educational windows and on to another tank and so on. Without doubt my favourite is Kuroshio (Black Current) Sea, with gigantic whale sharks made all the more spectacular by the presence of a diver carefully cleaning the inside of the tank. This particular tank holds 1.98 millions gallons of seawater taken from 300 yards off shore. It is the third largest aquarium tank in the world, after Atlanta GA’s Georgia Aquarium, founded by Home Depot co-founder Bernie Marcus (6.3 million gallons) and Dubai‘s Burj Dubai Mall Aquarium (2.64 million gallons). 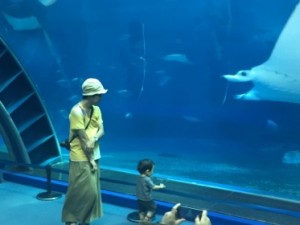 There are theatre shows, and demonstrations of dolphin feeding, everything you can think of. Admittedly it is a weekend but there seemed to be half the young mothers in Okinawa taking toddlers around. The kids particularly loved the more colourful fish and, at the end of the one-way tour, they ended up in the equally colourful gift shop. Museum shops in the west tend to be rather sombre affairs. This one is as if Miss Kitty got hold of it, with palest pastels and bright lights and pale blue baskets into which toddlers threw an enormous number of stuffed fish shapes – I never saw any doting parent taking said items back out of the shopping basket. 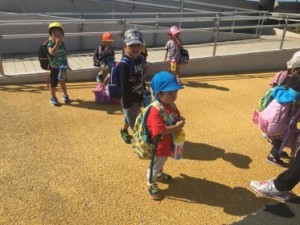 .. but THEY are fascinating too!

This reminds me, as we go back to our luxury floating hotel, Silver Discoverer, that the company supports theMaruzza Lefebvre d’Ovidio Foundation, a charity to give palliative care, especially for kids with life-threatening diseases, www.maruzza.org – it is named for the late sister of Silversea chairman, Manfredi Lefèbvre d’Ovidio (Maruzza Lefebvre d’Ovidio died of cancer in 1989 when she was 40).  We get back onboard and, what a relief, no more talks tonight. There is time to swim before we sail away, and dine.