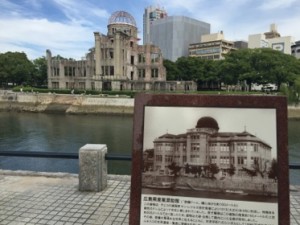 And now it was time for sobering history. The Good Ship Silver Discoverer – the luxury floating hotel that, with only 60 cabins, is able to get to smaller islands and inlets – docked for half a day in Hiroshima. The gal was able to spend a couple of hours absorbing the horror, peace and hope that resulted from the dropping of the first-ever atomic bomb used in war, at 8.15 a.m. on August 6th, 1945. The only few buildings to survive within a two-kilometre radius were reinforced concrete. One, now known as The Dome, was by Czech architect Jan Letzen. Look at what remains, deliberately left as a memorial, and look at the photograph of how it was, before. 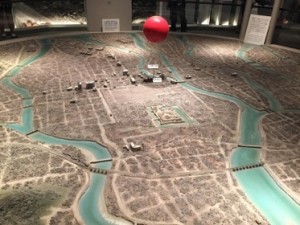 Map of Hiroshima with the ‘red ball’

The nearby Hiroshima Peace Memorial Museum is a significant record. Hundreds of school kids and others move through continuously, but scarcely a sound can be heard. It is the literal ‘you could hear a pin drop’. There are countless photos of exhibits of burned bits of victims’ clothes, even charred remains of lunch boxes, but for me the focal point was a large three-dimensional map showing exactly where the bomb exploded 600 metres above a city of 350,000. The uranium atoms split, the blast pressure was up to 19 tons per square meter, an instant fireball and radiation pulse engulfed everything within the two-kilometre radius. Later, highly radioactive black rain fell. 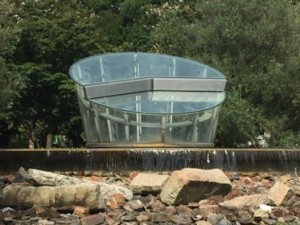 There are many things to see as well as the main museum. The Hall of Remembrance, for instance, is a circular concrete bunker reached via a curved slope down. Sit in the Hall, and gaze around at a 360-degree panorama of how the city looked, after the bomb, from its epicentre. The calmness reminded me, in a way, of the sombre Mark Rothko chapel in Houston. Then, being Japan, they have thoughtfully provided an escalator to bring you back up to ground level. There, look at the ground-level roof of the Hall, its midpoint, a glass clock stuck at 8.15 precisely, in fact forming the roof’s central window in the Hall below. Around the clock is an infinity waterfall, and around that are charred and seared relics of the destruction. 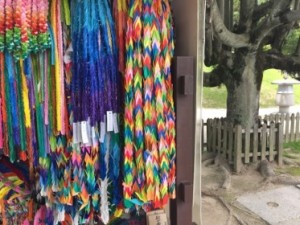 Walk in the surrounding Peace Park, that runs from the Museum north to the Dome building. There is a grassy mound containing the remains of many thousands of the about-a-quarter-million who eventually died, those who were never identified. There is also, among the meticulous greenery and subtle concrete memorials, two points of colour, both done by and for Koreans, a reminder of the Koreans who lost their lives. And then, dear reader, it was time to return to the luxury hotel at sea (we did go on to Nagasaki, where a plutonium bomb was dropped three days later,  but it was Hiroshima which had the most effect).