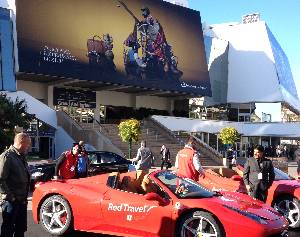 So here we are, in sunny Cannes at the annual ILTM, the International Luxury Travel Market which draws every luxury hotel, cruise line and travel agent from around the world.  Look at the entrance.

Surely the Cannes Film Festival, also based here at Palais des Congrès, right on the seafront, cannot provide such a lineup of glorious cars, and such an iconic banner (it does, to be honest, probably bring in more beautiful people but we all know that beauty is superficial).

Luxury travel is meaningful experiences that last forever. That is why over 3,000 people, exhibitors and agents, come every year to Cannes to find out what is new, and what is still worthwhile for today’s authentic travellers.

The gal, of course, was there (apart from anything else she was doing daily Gostelow Report Live commentary sheets, for the organizers, Reed Events). 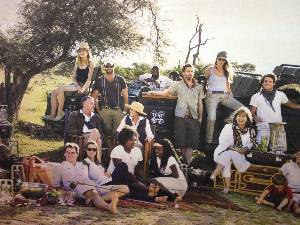 A nostalgic photo occupied a wall of the Relais area...

Talking of authenticity, how about this photo, showing a group from somewhere, sometime, enjoying each others’ company.  This was a background feature of the big Relais & Châteaux area up on the third floor of the ILTM area.

Three big consortia were up there: Leading Hotels of the World – which had over a hundred of one’s favourite hotels, each with a separate table – and Relais, and Small Luxury Hotels of the World (the fourth big consortium, Preferred, led here in Cannes by its President, Lindsey Ueberroth, preferred to be on the lower floor).  This area upstairs was like a big conservatory, with glass walls that wrapped over the top. 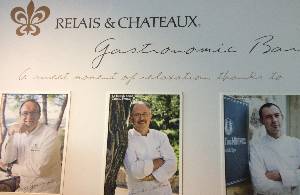 Another big draw of being up here or even coming here for meetings was the Relais Gourmet Bar, dispensing Taittinger and Pommery champagnes and canapés lovingly prepared by some of the top chefs in the Relais & Châteaux network.

Jaume Tapiès, who runs Relais & Châteaux, is delighted with the concept, and – a result of this Gourmet Bar – he and Ted Teng, head of Leading, are good friends.

Eating and drinking is obviously an important factor of luxury travel and during ILTM the restaurants around do terrific business during the lunch breaks of the show (my own favourites are New York New York, the Baoli Group brasserie in front of the Hotel Splendide, and, just behind it, Le Rendezvous – both are ideal for a quick lunchtime bite).  Many, however, prefer to stay at the show, and munch on their stands or up in the Relais area. 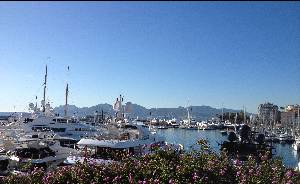 The view from the top floor terrace

And some go outside from the ‘conservatory’, to its wide terrace which is oh so ideal when, as now, the December sun shines nonstop.  A lot of business is done out there.  A lot of contemplation is also achieved.

Look across at the city’s helicopter pad, where I will fly from in a few days’ time.  Actually, you get a buzz just looking down at Cannes’ waterfront and the dozens of pristine, shiny-white yachts, some of which are hired for evening cocktails during ILTM (presumably during the Film Festival they are all hired, at grossly inflated rates).

Talking of films, I hear W Hotels has a new partnership with Intel, and with producer Roman Coppola, and the first movie premièred in London W Leicester Square last Monday.  No problem, you can’t be everywhere at once. 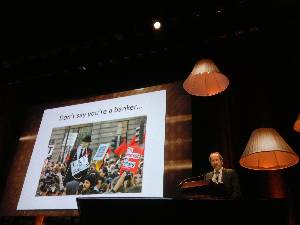 There are so many important people in the world of luxury travel here in Cannes this week that I wonder who is running the rest of the world.  Peter Bates, who truly understands what the two worlds of luxury and travel are about, convenes a personal forum of leaders, with names such as Raymond Bickson, head of Taj; Jennifer Fox, president Fairmont; Ralf Ohletz, President Regent; and Albert Herrera, front man of the Virtuoso travel agents’ consortium.

Of course, there IS another world, away from luxury hotels and luxury travel.  At the main ILTM Forum, The Economist’s magnetic speaker John Andrews said that and, at least until the German elections, the most important people will continue to be, in alphabetical rather than any other order, Merkel, Obama and Xi Jinping.   He included, by the way, a rather apt slide attacking bankers. 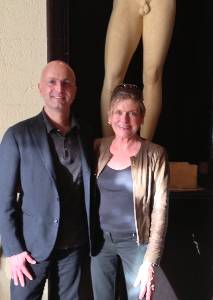 Silvio Ursini was one of the leaders at the Bates Bash.  He is the brains behind Bulgari hotels (gosh I loved their latest, London, beauty).  What a fascinating man he is.

Were he not conceptualizing luxury hotels, he would like to be an artist or perhaps spend more time on charity work.  He has already set up a Bulgari Foundation, whereby a share of sales of a particular Bulgari silver ring goes to support, say, schools in the favelas in São Paulo.

Ursini is multifaceted in an Italian Renaissance way.  He has his own Obiká mozzarella bars, for instance – find them in Selfridge’s, London, in lots of airports and in the Grand Hyatt, Tokyo.

Mozzarella, he says, is high in calcium and protein…   saying this to such a caprese-lover as yours-truly is music to my ears.  One of these days I could write a book about great tomato and mozzarella salads I have eaten around the world.  But back to ILTM…