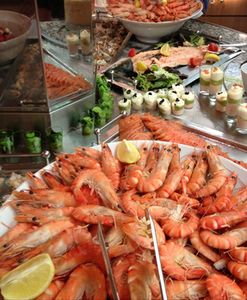 Simply Sunday. Boring is as boring does, says and wears. There are some travellers who always stay in the same hotel, preferably in their favourite room. They wear the same clothes, day in and day out – they must have two sets, for laundry, of course – and they eat the same foods. Lord Lucan, the British earl who disappeared without apparent trace in 1974 after allegedly murdering the family nanny instead of Lady Lucan, the target of his ire, had the same lunch every day, in his London club.  He started with smoked salmon, went on to lamb chops.

Be different from time to time, says the gal. Neurobics, to which I was introduced by a friend, means putting the ‘other’ leg first into your trousers, and holding your coffee mug in the ‘other’ hand.  This apparently causes brain nerves still not awakened to sit up and start working, which is good for them and incredibly good for you.

See this platter of cold cuts on the buffet at Brittany Ferries’ excellent cross-channel ferry Bretagne. Even if you do not normally hog on smoked salmon (doing a Lucan..) and prawns, go for it this time – after all, you might be back in yet another luxury hotel tomorrow…..