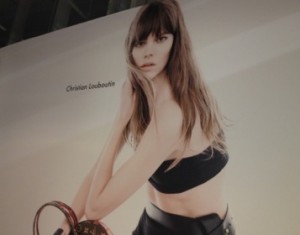 Part of the Louis Vuitton hoarding at Heathrow

Simply Sunday.  Ideas come from wherever.  Rushing through Terminal Five of London’s Heathrow airport the other day – as the gal does, far too often – my eye was caught by yet another hoarding, airside where they are putting in yet more retail (soon there simply will not be ANYwhere for people actually to sit).

Anyway, what is Christian Louboutin doing diverting from shoes to bustiers, shorts and, just out of the picture, handbags (though the last is more understandable)?  Well, this is part of Louis Vuitton‘s current push for publicity, asking well known designers to come up with ideas that could make use, however discreetly, of the LV logo.  There is Louboutin, there is architect Frank Gehry – who did the amazing Marques de Riscal hotel – and there is Cindy Sherman, best known for taking socially critical photos of herself.

It seems this promotion was the idea of Delfine Arnault, the daughter of LVMH boss who current heads Louis Vuitton. But the message is clear – think differently. Why be boring?  I was asked, the other day when I had cycled to my doctor’s surgery to have a flu injection,  if I was allergic to anything. Wasting time and boring things (like people and just a few hotels). But Girlahead finds the interesting, and different, pointers about luxury hotels.  Boredom is banished.