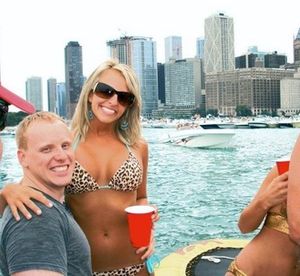 There is another reason to come back to Chicago.  The annual Chicago Scene Boat Party 2013 is Saturday, July 27th.  The New York Times says this is one of the best boat parties in the USA.  Anyone can turn up, as long as they have a boat or they are invited on one. No charge.  Bring your own food, water and drinks.  Wonder how the luxury hotels along the Magnificent Mile cope with all the wet bikinis, hair and belongings that straggle in at the end of the day?  The gal is, come to think of it, not so sure she will put it in her own diary (even though it would give an excuse to get back to the best on-the-spot shopping in the world). 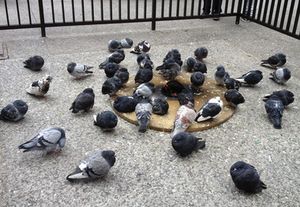 Mind you even at the beginning of April it was still freezing in the Windy City – on April 1st, 2013, it went down to minus-two and that is not an April Fool joke.  No wonder pigeons had found an eternal flame in front of the police station in The Loop.  Although the stupid birds were in danger of getting their bottoms burned, they were jostling in closer and closer to the flame, playing an attack game to beat their opponents. Grey pigeons, and people around dressed in greys or dark browns or blacks.  Top winter coat of the season is a black puffa from North Face, which cleverly puts its logo on the back.  Girlahead tip, if you want to look like a real Chicagoan, get a black puffa, hip or knee length. 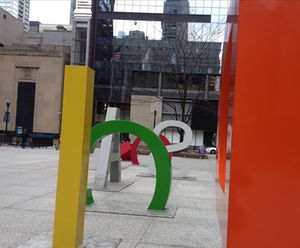 These letters spell PICASSO (starting from the right, here)

But there is brightness.  In Daley Plaza, right near the pigeons, seven bold letters set in concrete spell out the word Picasso – the P is on the right of the photo.  These are gorgeous.  They are the label for a gigantic, 50-foot tall cubist sculpture The Picasso, which is grey and impossible to photograph.  In 1963, Skidmore, Owings, and Merrill, architects of the Richard J Daley Center, commissioned the sculpture. Picasso created a maquette and it was made in Gary IN.  Picasso, offered $100,000, refused, saying it was a gift as he was working on commissions for ‘the two great gangster cities’ (the other was Marseille). Chicago journalist Mike Royko, on seeing the final, said it has the eyes of every slum owner who made a buck off the small and weak. 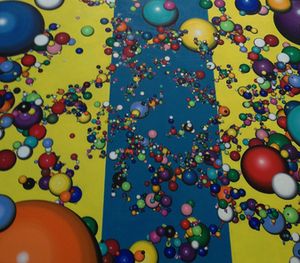 Seen in the lobby of Hyatt’s head office

There is colourful art in the absolutely gorgeous Hyatt headquarters, finished in 2006 – by, coincidentally, Skidmore, Owings, and Merrill (now called SOM).  The interior is light and bright, with acres of American walnut giving the luxe, high-concept aesthetic of Japanese-American artist designer George Nakashima, whose daughter Mia provided some of his wood surplus. Open stairwells – wood stairs, right-angled bends everywhere, masses of frosted and plain glass – have wood pods cantilevered over them.  These pods are fabulous all-wood coffee stations, with latest kitchen equipment and television.  Work hard, rest when you have a minute. 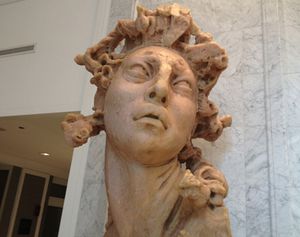 A sugar and seed Medusa at the Waldorf Astoria

The art in the lobby of Waldorf Astoria Chicago is, well, rather odd. A large marble space that is, of course, the lobby appears to have a chandelier that could be at least 12 inches deeper, or lower or whatever. Plonked behind it, on ground-set plinths, are two heads of Medusa.  Look at them from the back and you see they are merely shells, and the interiors are sprinkled with seeds. Apparently both sculptures are Mexican, formed of moulded brown sugar and seeds… What happens when the sculpture become warm?  And what happens, by the way, when you offer someone a gratuity in this hotel, which Fodor’s says is ‘tip-free’?  Is this possible, in the marvellous US of A? 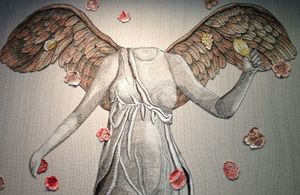 Nearby, an embroidered angel has lost her head

The website of the hotel’s local designers – Lisa Simeone and Gina Deary, working as Simeone Deary – says their work ‘evokes emotion, sparks dialogue and leaves the visitor yearning to return’. It certainly makes me want to return to this luxury hotel.  As if playing Heads, Bodies and Legs, in the lounge off the lobby is an embroidered hanging, with no head (pity the Medusas would not fit).  I want to know more.  But then I want to know more about the city’s art and culture.  The Art Institute of Chicago, most famous for its American, Impressionist and Post-Impressionist paintings, is second only to New York’s Metropolitan Museum of Art in size, in the USA. And so many shows preview here before heading for Broadway there is yet another reason to return.