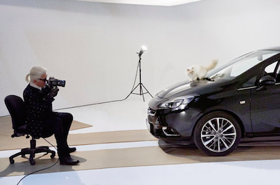 I am Choupette Lagerfeld and I am Daddy @KarlLagerfeld‘s spoiled pussy, says Choupette, the cat who is at home at the luxury Rosewood The Mansion on Turtle Creek hotel as she is in photo shoots.  With over 46,000 fans on her @ChoupettesDiary Twitter account, Lagerfeld has been heard to say, says the gal, that soon people will talk more about Choupette than him. Choupette also, according to AOL reports, earned a staggering $2 million last year in photo shoots.

Why don’t luxury hotels take more notice of pets?  Look at the Rich And Famous, from Paris Hilton on, with their little lovelies.  I shall be talking soon about Hyatt Regency Hakone which, so far, best knows how to cosset dogs.

Meanwhile, back to Choupette, whom Karl Lagerfeld acquired Christmas 2011 from model Baptiste Giabiconi.  Only three weeks later she first made a media appearance and now her fame grows and grows, with talk of a make-up range, for humans, and more.

Is the world becoming a zany place? Thank goodness for the stability that luxury hotels offer… happy Easter.