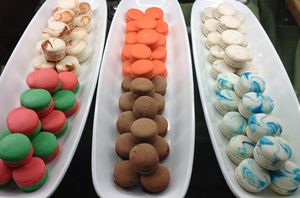 Trays of macaroons at GTC

Simply Sunday. While cupcakes are on the wane, macaroons go on forever. Buy them on Google or in any decent patisserie, give them to friends, find them by your bedside in top luxury hotels… one bite, and, according to Calorie Lab, typically only 150 calories a go.

Macaroons in English, macarons in French – both come from the Italian maccarone or maccherone, in turn derived from ammaccare, to beat or crush (the main ingredients are crushed almonds, beaten with egg whites). Fillings get increasingly exotic.  See the selection, shown, at Garces Trading Company GTC in Philadelphia (which also has amazing cheeses, and olive oils to try-and-buy). Talking of which, Pierre Herme’s olive oil and vanilla macaroons are out of this world.

Paris-based Pierre Herme is universally acknowledged as the king of macaroons (see his book, Pierre Hermé, Macarons). How can one do a whole book on the subject?  As a 14-year old from Alsace he apprenticed with Lenôtre in Paris, moved on to Fauchon and then Ladurée, where he publicized the macaroons they were already serving.  Now he has seven stores in Tokyo, including the New Otani luxury hotel, six in Paris and one in London – and he is pastry chef at Royal Monceau Raffles Paris. You can even buy his macaroons at airports… go with the craze, and feel much more up-to-date than snacking or, or giving, a box of cookies.